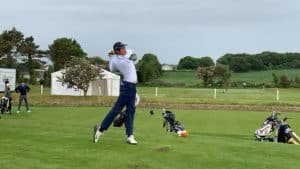 “I played really nicely; I hit a fair amount of greens and fairways to put score around here,” said the Ekurhuleni junior. “I didn’t play particularly aggressive today. I just tried to keep the ball in play to avoid big numbers.”

Premlall eagled the par five third and stayed bogey-free until his only hiccup at the par four 12th.

“I just missed it left at the first fairway, but I had a decent lie so I went with a typical South African high lob and pitched it close to save par.

“I hit it in the bunker off the tee at the second, but luckily I hit the rake so I had quite a lofty 9-iron out. I had 80 metres in and hit a good approach but unfortunately the birdie putt lipped out. It happens.

“At the third, I hit a great drive down the middle and a 2-iron from 250 metres out to 10 foot. I boxed the putt for eagle and I was pretty pleased with that. Just tried to keep it together down the front nine. I birdied 16 and 17 and I knew I could finish with a birdie if I hit two good shots on the par five.

“I drove the par fives well so I tried to hit one hard at the green, but this time I blocked it out a bit and had quite a tough pitch shot in from about 250. I hit it perfectly to a foot and a half and made the putt for 68. I tried to shoot a score that could get me into contention and I was happy that I did a pretty good job.”

Matt Saulez from KwaZulu-Natal was left to rue a triple bogey at the closing par five that saw the Durban Country Club golfer sign for a three-over 75.

Malone Golf Club’s McClean had an almost perfect round that featured seven birdies with his only blemish coming on the 15th.

The top 42 players and ties will progress to the 36-hole final round on Monday after Sunday’s second round.