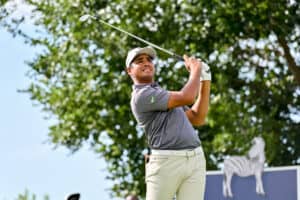 GolfRSA No 1 Yurav Premlall is targeting a repeat performance of his 2021 Freddie Tait Cup triumph when he heads into the final round of the 112th Investec South African Open Championship at Blair Atholl on Sunday; credit GolfRSA.

3 December 2022 – South Africa’s No-1 ranked Yurav Premlal placed himself within reach of a successful title-defence of the Freddie Tait Cup in the Investec South African Open after a third round 71 got him within reach of leading amateur Christiaan Maas on Saturday.

But the 19-year-old Junior Presidents Cup player will have his work cut out to etch his name on the coveted silverware for a second successive time.

A record five amateurs made the 36-hole cut at Blair Atholl Golf and Equestrian Estate – the most amateurs to make the weekend in more than decades, an impressive achievement which speaks volumes about the strength of the GolfRSA National Squad and the institution’s ability to develop quality golf players.

The top ranked five amateurs in the country, Premlall and Maas, 2022 Amateur Championship winner Aldrich Potgieter and the reigning SA Amateur and SA Stroke Play champions, Kyle de Beer and Jono Broomhead are determined to make the most of their invitations to join the world-class Sunshine and DP World Tours field in the 112th edition of the world’s second oldest national Open. 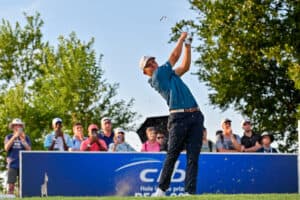 While Maas remains the man to catch and will sleep on a four-shot cushion on 10-under, he will be well aware of Premlall in his rear-view mirror, and he won’t rest easy.

In February, the Glendower golfer paced Casey Jarvis at Leopard Creek to seal a second successive runner-up finish in the African Amateur Stroke Play Championship and kept his foot on the pedal to reel in a slew of top 3 finishes and a trio of wins – the most recent coming two weeks ago in his title defence in the Central Gauteng Open.

Premlall showed he cannot be discounted when he fired three birdies on his way to a five-under 67 to complete his weather-interrupted second round.

But he battled a wayward swing on the 13.2 km on moving day.

“It was tough, because I wasn’t hitting the ball very well. The conditions were hot and humid, and it was a struggle to grind it out for the full 18 holes and finish under par,” Premlall said. “But I love being part of the biggest tournament in South Africa and competing at the highest level and I am happy to be in this position. It’s all systems go for the final round and hopefully I can send it even more.”

A bogey on the fourth halted his steady start of three straight pars and he gave back his first gain on the sixth with another drop on the seventh.

Level at the turn, he started the back nine similar fashion with three pars on the trot before finding joy with a birdie on the 13th.

“I fought hard to keep any big numbers off my card, and I was happy to finish with four consecutive pars before the closing on 18,” said Premlall, whose efforts on day three in Mogale City has set him up to launch a title-defence. 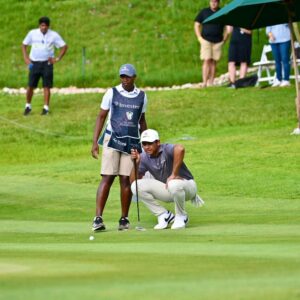 Yurav Premlall in action during the 3rd round of the 112th Investec South African Open Championship at Blair Atholl; credit GolfRSA.

Less than a handful of amateurs have ever been able to execute this feat since the first Freddie Tait Cup was first awarded in 1929. In fact, while a number of golfers lifted the trophy twice or more, one would have to go back a full 60 years to Barry Franklin’s back-to-back feats in 1961 at East London Golf Club and subsequent triumph at Houghton Golf Club.

“It would be incredibly cool if I could do it, but I’ll have my job cut out to join that list,” Premlall said.

“It’s going to be a stiff competition with all the amateurs who made the cut capable of going low. Anyone could run hot on the day. I will have to take care if my process, because I can’t control what everyone else is doing. I’ll play my own game and hopefully, it will get me there.”

Premlall is wise not to let the prospect of defending his title get in the way of the job at hand.

Maas has been in impressive form and his comeback after a rocky start that saw him squander five shots in the first seven holes to fight back to level par, illustrated his strong mental game. 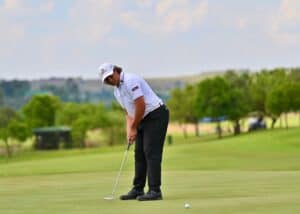 2022 Amateur champion Aldrich Potgieter in action during the 3rd round of the 112th Investec South African Open Championship at Blair Atholl; credit GolfRSA.

Southern Cape’s Potgieter, especially, is capable of producing fireworks, as he proved with a tournament record 20-under-par winning total in the Nomads SA Boys U-19 Stroke Play Championship.

“It was difficult today because the wind was up. I knew it would be tough, but then, it was tough for everybody,” Potgieter said after a third successive 71 left him seven off the pace. “I felt like I had the advantage at the start of the round, knowing that if I put a good score, I can move up the leaderboard, but unfortunately, the putter stayed cold. I’m hoping it warms up and more putts fall on Sunday.

“To have a chance, I will have to manage the greens better, because I’m just playing par golf at the moment. Hopefully, the conditions are good, and we can post a low one tomorrow.”

At 15 years and five months, Premlall remains the youngest amateur to qualify for and make the cut in the Investec South African Open. And after four appearances, he is taking a simple approach in his fifth start. “I’m looking forward to Sunday. I love the atmosphere in the final round, because it motivates me. Good golf takes care of everything, so I will need to play well,” he said. “My coach, Grant Veenstra always tells me that if you play good golf, then everything else falls into place.”

De Beer and Broomhead both returned rounds of 77 and will start the final round on two-over.