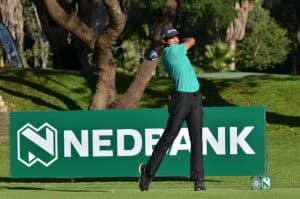 GolfRSA National Squad member Yurav Premlall from Glendower in action during the first round of the Nedbank Junior Challenge at the Gary Player Country Club; credit GolfRSA.

3 May 2021 – Glendower’s Yurav Premlall laid down a marker in the first staging of the Nedbank Junior Challenge when he fired an opening four-under-par 68 in an impressive start at the testing Gary Player Country Club.

On a day when only three golfers posted under-par rounds, the 17-year-old opened up a two-shot lead with a perfect start and finish to his opening salvo.

Starting on the par-five 10th, Premlall blasted out of the blocks with a trio of birdies but his flawless exhibition was interrupted by a solitary bogey on the challenging par-four 18th hole, where 40 Nedbank Golf Challenge champions have lifted the iconic crystal trophy.

“I got off to the fast start with three birdies in a row,” said the 2021 Pro Shop Northern Amateur winner. “I drove it far down the right on the 10th, but I had a decent lie in the rough. I hit a 2-iron just short of the green and made a good up-and-down birdie.

After his mid-round stumble, it looked as though Premlall would be eclipsed by Duminy and De Klerk, but he regained the lead with an exquisite chip shot to tap-in distance at the par-five 2nd.

“I had hit my tee shot too far left on the 18th and got a mud ball out of the rough,” Premlall said. “I managed to miss the bunker right, but I couldn’t up-and-down to save par. I made amends on the second hole when I chipped it close and made the birdie putt.

The GolfRSA No 3 Junior stayed ahead of the chasing pack with six successive pars and sealed his position at the summit with a closing birdie at the picturesque par-five 9th.

“On the last hole, I was way right off the tee, so I punched out and left myself 120m in. I didn’t want to take on that pin, so I aimed right of the flag and the shot came off nicely. And I holed a 20 foot putt to finish with birdie.”

Premlall said that although the outward loop seemed impressive, he was very pleased with his game on his back nine.

“I didn’t really have a golf swing for the first nine holes, but just managed my game with some good up-and-downs and a couple of good breaks, if I’m very honest,” he said.

“On the back nine I started finding my swing and hit the ball really solid. I had nine holes of bogey-free golf, which is really tough to do around this course, so I’m pleased with that result.

“The course is a little shorter than when we played the SA Open here last December, but it’s also so wet that the ball is grabbing up a lot faster. The greens are a little slower too and I am still adjusting to that pace, but hopefully I’ll have the measure of them by tomorrow.”

Pecanwood’s De Klerk also started with three birdies on the bounce from the 10th and picked up two more on the par-four 14th and par-four 5th, while reigning Boland Amateur champion Duminy racked up five birdies in his opening round.

Maas, who took his title tally to 13 in the last eight months with his runaway triumph in last week’s Nomads SA Boys U-19 Stroke Play Championship at Waterkloof Golf Club, pencilled two birdies and an eagle on the par-five 2nd hole on his card. Unfortunately the reigning SA Amateur champion offset his gains with four bogeys.

Ngobeni, who represented Mpumalanga in the 2019 SA U19 Inter-Provincial at Oubaai, came into the week ranked third on the Mpumalanga Junior standings.

The 17-year-old Kambaku golfer backed up his first victory on the provincial junior circuit in 2020 with another trophy finish this year, as well as a runner-up finish in the Sabie Junior Open, third in the Middelburg Junior Open and a sixth place finish in the Witbank Junior Open.

Fellow SAGDB member TJ Sandys, son of Sunshine Tour legend Omar Sandys, reached one-under with three holes to play, but a double bogey at the par-three 7th was his undoing.

Further down the leaderboard, both finalists of the Nomads SA Boys U-19 Match Play Championship on the weekend – medallist Hannes Strooh and runner-up Daniel Bennett – finished in the six-way tie on three-over.