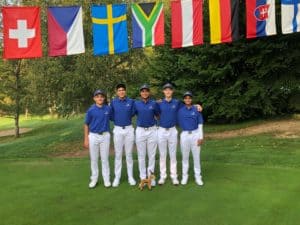 The 16-year-old GolfRSA National Squad member made the most of an early start and the course knowledge he gained during two previous trips to Italy to navigate the championship layout at the Golf Club Biella Le Betulle in two-under-par 71.

The BSI Golf Academy player will carry a one-shot lead into the second round over Italian junior Riccardo Fantinelli, Nilsson Sillesen from Denmark and Scotsman Ruben Lindsay.

The remaining four South African juniors challenging for the Teodoro Soldati Trophy for the first time, made a promising start on the tight and tree-lined course.

Nash de Klerk from Pecanwood Golf and Country Club returned a round of 77 to tie for 36th, while Kirkwood’s Malan Porgieter is a further shot adrift in joint 49th.

Premlall was joint 17th in his debut in 2017, and finished in a tie for 11th last year when the 72-hole individual stroke play event was reduced to 54 holes due to torrential rain on the last day.

“I learned a lot from playing the course with Martin Vorster, who won in 2017, and I just tried to stick to the strategies we worked out during our practice round,” said Premlall, who overturned an early bogey at the par four third with three birdies on the bounce from the fifth.

“From my past experience, I know that positioning is key because the course is really tight. Anything offline is severely punished, so I tried to hit as many fairways and greens as possible.

“At the third hole, I hit a 5-wood down the middle and pitched my second pin-high right. I had about 25 feet left to the pin. There was still quite a lot of dew on the greens and I left the first putt up the hill about eight feet short and missed the par putt.

“I made a brilliant par on the fourth after hitting it in the hazard off the tee. I had to hit a massive cut around the trees. I hit it just over the green and chipped it to give. Five and six are crucial holes and we said we just need to try and make pars in that stretch.

“I stuck to the strategy we decided on in the practice round and hit my tee shot on four into the bail-out zone just short of the green and I holed the chip. On six, I hit 5-wood onto the wide side of the fairway again. I hit a good pitching wedge from 143 metres pin-high right and boxed the 12 foot putt.

“I struggled with my driver in the practice round, but I took it out on the par five seventh and hit a great drive down the middle. I took 3-wood for my second from 240 metres and hit it to eight feet. “Unfortunately the eagle putt lipped out, but I holed a short on for birdie. From there I just played really solid golf tee to green and made a string of pars. I missed a few birdie chances, and had some good par saves to keep the round going.

“The more you play this course, the better you perform because you start learning where to hit it and what areas to avoid. The whole GolfRSA group is off to a good start, and I believe the new guys will improve with every round.”