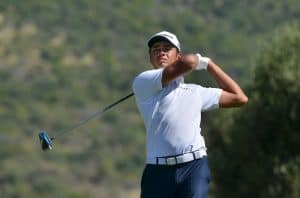 4 May 2021 – Yurav Premlall is aiming to become the first winner of the Nedbank Junior Challenge on Wednesday, but the 17-year-old will have to stave off fellow GolfRSA National Squad member Jordan Duminy, as well as a few other in-form contenders, in the final round.

Premlall slept on a two-shot cushion after opening with a 4-under-par round of 68 at the Gary Player Country Club.

With a tough set-up on moving day, the Glendower teenager managed to hold on to the lead with an even-par 72 that included five birdies, but also two double bogeys and a bogey.

He will start the final round on 4-under, just one shot ahead of Duminy, who was one of only three players who could break par on day two.

“Today was quite up-and-down,” said South Africa’s No. 3-ranked junior. “I built some nice momentum with three birdies in the first five holes, then slipped up with a double on eight.”

“I managed to get one shot back on the ninth and birdied the 13th after a soft drop on 12. But then I doubled 15, as well. Both my doubles were errant tee shots. On eight, it was a 2-iron that I leaked right into the bush and I had to hit my second from the penalty area.

“On 15, I hit a duck-hook with a 3-wood that went into the bush on the left, so I had to return to the tee box. On the upside, I made a great save on the 1st, where I holed a 10-footer for par. On the 3rd, I drove the front of the green and two-putted for birdie and I also holed a very good 12-footer up the hill on 18 to save par.”

“The course was playing really tough today and the fact that I was able to hang on and make pars on the three difficult closing holes gives me some good momentum to take into the final round. This course is always a challenge and the final round will be no different.” 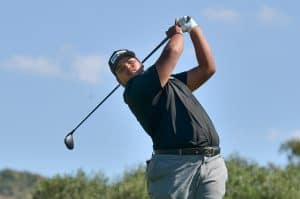 GolfRSA No. 2 Jordan Duminy from the Southern Cape will start the final round just one shot behind leader Yurav Premlall at the Gary Player Country Club; credit Ernest Blignault

The GolfRSA No 2 also got it to 3-under through the first five holes, but he lost the advantage with double bogey on the par-four sixth and another dropped shot on the par-four eighth.

“On the sixth hole, I pushed my tee shot into the right bunker and I didn’t have good lie. It came out straight left and into the bush. I had to hack my way out, so I was actually happy with the six; it could easily have been a seven or eight,” said the 17-year-old Louis Oosthuizen Junior Golf Academy member.

A birdie start to the back nine helped to settle him down.

“I struggled in the middle of the round, but the birdie on 10 got me back in the red. I just kept grinding, but the putts didn’t want to drop. I found the set-up a little easier than in the first round, but the pins were tricky. You couldn’t really go for the flags.

“I am happy that I gained some ground on Yurav. I am driving the ball well, so hopefully I can make another strong start and get the putter to cooperate in the final round.”

Reigning SA Amateur champion Christiaan Maas went five deep with a trio of birdies around the turn and was tied for the lead at 4-under with two holes to play when disaster struck.

The country’s top-ranked junior found the drink on the challenging par-4 17th and walked off with an eight on his card. A bogey finish on the closing hole for a 1-over 73 will see him start the final round five off the pace.

Behn Heyns from Middelburg was the big mover on the day.

The 17-year-old Middelburg golfer arrived at Sun City with some good form, having converted three consecutive top-three finishes on the Mpumalanga Golf Union circuit with victory in the Highland Gate Open in April.

Behn began his tournament with six consecutive bogeys and signed for a first round 79, but he came out firing on day two to take the low round honours with a 4-under-par 68. 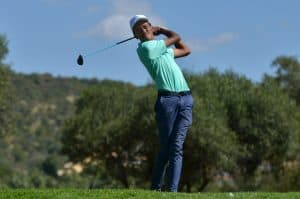 The 16-year-old Klerksdorp junior improved 15 shots on his first round 89 and a well-executed 74 moved him into eighth place. “My dad told me to keep it in the fairways, hit the greens and putt for par. He said that making par at the Gary Player is like 4-under at any other course,” said the 2021 Orkney Junior Open champion.

“I guess I had to learn that for myself. It was a much better round from me and hopefully I can do even better in the final round.”

John-William Blomerus was the final junior to shoot below par.