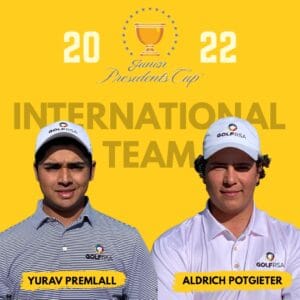 GolfRSA National Squad members Aldrich Potgieter and Yurav Premlall will fly the flag for South African in the International Team at the 2022 Junior President Cup in the USA this September; credit GolfRSA.

26 August 2022 – Reigning British Amateur champion Aldrich Potgieter and GolfRSA No 1 Yurav Premlall will be teeing it up for the International Team in the 2022 Junior Presidents Cup in the United States this September.

The two-day, team match-play competition features 24 of the world’s top junior boys aged 19 year and younger – 12 from the United States and 12 from around the world, excluding Europe. While the U.S. Team is selected off the Rolex AJGA Rankings, the International Team comprises the leading 10 juniors based on the World Amateur Golf Ranking (WAGR).

Potgieter, ranked 39th in the world, qualified at number two in the standings, while fellow GolfRSA National Squad member Premlall, 199th in the WAGR, was fifth in the rankings.

The Junior Presidents Cup was created to give the world’s best non-European juniors a unique playing opportunity to compete in an international team match-play competition and to grow and showcase the global reach of junior golf.

Making the International team is another big milestone for Potgieter in his first season on the GolfRSA National Squad.

In July, the 17-year-old showed maturity beyond his years to lift the 127th Amateur Championship title in Scotland. In a thrilling 36-hole final at Royal Lytham & St Annes, the young gun stood his ground in the face of a superb comeback from Englishman Sam Bairstow to seal a nail-biting 3 & 2 victory.

Following a tie for third in the African Amateur Stroke Play Championship on debut, he won the Nomads Junior International, became only the fifth junior to achieve the rare double in the Nomads SA Boys U-19 Championship and lifted the Western Province Amateur title. 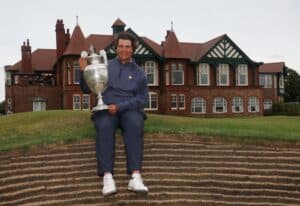 “Being able to participate in the Junior Presidents Cup is one of the highest levels of junior competition a player can compete in,” Potgieter said.

“To represent my country and play in such an amazing event is a great honour. This is an awesome event and has always been a goal of mine since I started competing at a high level. I am really looking forward to it and can’t wait to represent South Africa.”

Glendower’s Premlall, the leading amateur in the 2021 South African Open Championship, has not finished outside the top 10 this season and rose to the No 1 spot in the GolfRSA rankings on the back of a runner-up finish in the African Amateur Stroke Play Championship and victories in the Northern Cape Open and Western Province Stroke Play.

During the GolfRSA National Squad Tour to the United Kingdom in July, he followed a tie for 34th in the Brabazon Trophy with a tie for ninth in the Scottish Men’s Open in brutal conditions at Cruden Bay Golf Club.

“Getting the email to confirm my selection for the Junior Presidents Cup was one of the best highlights of my year so far,” said the Grant Veenstra Golf Academy member.

“I am super blessed and grateful for the opportunity to represent South Africa and the International Team on the world stage, and I am looking forward to this fantastic experience that has been given to us by the AJGA. I am also grateful to GolfRSA for all the opportunities they have given me to get myself in this position. It’s going to be a blast. Let’s go Internationals!”

Tim Clark, from South Africa, will captain the junior International Team. A three-time Presidents Cup participant in 2003, 2005 and 2009, Clark also served as a captain’s assistant on the International Team in 2011.

The two captains will pick their 11th players, and the 12th and final spot will be awarded to the leading player on the WAGR list and Rolex AJGA Rankings respectively, on 8 September.

The junior event will precede the 2022 Presidents Cup, which will be held at nearby Quail Hollow Club later the same week.

“We are absolutely delighted to have Aldrich and Yurav in this year’s International Team,” said GolfRSA CEO Grant Hepburn. “South Africa fielded four juniors from our GolfRSA National Squad in the 2017 Junior President Cup and five in the 2019 edition. We are thrilled to have two more South Africans in the team this year despite the fact that the international travel ban brought on by the COVID-19 pandemic severely hampered our efforts to give our top juniors the chance to compete and earn valuable world ranking points abroad in 2020 and 2021.

“To have Aldrich and Yurav among the automatic qualifiers is not only an indication of the strides we are making in amateur golf in South Africa, but it pays homage to their commitment, drive and determination to make the most of the opportunities afforded to them this year.

“Credit must go to the golf clubs, coaches, golf academies and unions who work in conjunction with GolfRSA to identify and nurture our junior talent, and to our chairman, Mr Johann Rupert, whose financial backing of the GolfRSA National Squad allows us to further enhance their development.

“Aldrich and Yurav have shown tremendous dedication and commitment over the last 12 months. We are incredibly proud of their achievements, and I have no doubt that their participation will inspire a whole new wave of young stars waiting in the wings.”

The U.S. Junior Team won the first two events, prevailing 14-10 in the inaugural edition in 2017 at Plainfield Country Club in New Jersey, and just managing to hold off the Internationals at the Royal Melbourne Golf Club to win 13-11 in 2019.

South Africans have been major contributors to the Internationals’ points tallies in the past.