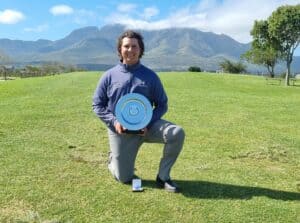 Potgieter returns to Australia next week play in the WA Open on the professional PGA of Australasia Tour, and the win will give him a timely boost ahead of a reuniting with some old Western Australian team mates.

Potgieter, who was born in South Africa, emigrated to Perth with his family as an eight-year-old and learned his golf in the city’s northern suburbs, before returning to the land of his birth in December of last year.

At the time, he had built up a formidable amateur record in Western Australia, and since joining the GolfRSA National Squad, the 18-year-old, who is part of the Luis Oosthuizen Academy, has seen his career really take off, culminating in a win in the Amateur Championship at Royal Lytham & St Annes in July.

His latest win, achieved at Kingswood and George Golf Clubs, was a hard-fought one.

He opened with a superb five-under-par 67 at George, in a wild round that featured three bogeys and eight birdies, including five in a row to finish.

In the second round, at Kingswood, he opened with an eagle on the par-five 1st and made another birdie at the 3rd to put a bit of daylight between himself and the chasing pack that included Bhana, Western Province trio Jack Buchanan and Andries van der Vyfer and Pearce Nash Lewin and Bryanston’s Pascal Gunther.

But dropped shots at the fifth and another at the par-three 18th hole saw him forced into a playoff with Country Club Johannesburg’s Bhana.

While Bhana found the water with his second on the par-five opening hole, Potgieter was left of the green and managed a superb chip and putt for birdie and the win.

“The putts just didn’t want to fall today,” he explained. “I gave myself a lot of opportunities, but it wasn’t my day and I just had to stay patient. Amilkar was playing great golf, so I knew I had to make that up-and-down on the first hole of the playoff and I’m so happy that I managed to do it.

“I’ve got a long flight ahead of me, but I’m really excited to play in the Nexus Advisernet WA Open next week and go head-to-head with the professionals. I’m also looking to seeing lots of old friends and familiar faces from my time Perth.”

Milnerton’s Jack Buchanan finished in third spot, just one shot out of the playoff, while Van der Vyfer and Lewin shared fourth.