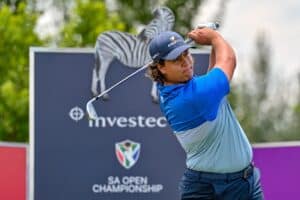 30 November 2022 – Having had a taste of The Open Championship thanks to his triumph in The Amateur Championship at Royal Lytham and St Annes in June, GolfRSA National Squad member Aldrich Potgieter will be hunting more prestigious silverware in the 112th Investec SA Open this week.

The 18-year-old’s debut in the Sunshine Tour event, co-sanctioned with the DP World Tour, at Blair Atholl Golf and Equestrian Estate marks yet another important milestone in the budding career of one of South Africa’s hottest prospects.

His short amateur career has been nothing short of impressive.

Having emigrated with his family to Australia at the age of eight, Potgieter honed his golf in Perth, and hurtling from a lowly 6 000 in the Official World Amateur Rankings at the start of 2020, he broke the top 800-mark by June 2021.

When the Potgieter family decided to move back to South Africa late last year, he was West Australia’s No 1 Junior & and Golf Australia’s No 6 Junior.

The big-hitting Mossel Bay golfer continued his upward trajectory this year, both in his birthland and abroad, and when he steps up to the tee for his first appearance in the second-oldest national on Thursday, it will be as the No 45 in the world.

His 2022 scorecard boasts a healthy number of top-10 finishes on the Open Amateur circuit which has taken him to fourth in the GolfRSA Open Amateur Rankings, which earned him an invitation into the star-studded field at Blair Atholl. 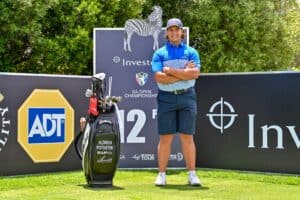 “It’s been an awesome journey playing in South Africa so far,” said Potgieter. “Competing in The Open was a huge learning curve and an amazing experience, and I think it prepared me well. It is going to be awesome playing with some big-name players. It’s always a good learning experience to mix it up with the best players out there, players you look up to. Coming into this week, I don’t expect a lot. I just want to have an awesome experience and enjoy the moment.”

While the Louis Oosthuizen Junior Golf Academy member refuses to put pressure on himself ahead of this world-respected tournament, Potgieter is very much aware of what is at stake.

Awarded to the leading amateur at the end of the SA Open, the Freddie Tait Cup is steeped in history, and no fewer than 13 Freddie Tait Cup winners have gone on to win the SA Open, including Major champions Ernie Els, Trevor Immelman and Charl Schwartzel and European Tour winners Branden Grace, Brandon Stone and Dylan Frittelli. Five-time Open champion Bobby Locke won the Freddie Tait Cup and the SA Open twice, in 1935 and 1937, and Denis Hutchinson was the last amateur to win both trophies in the 1959 SA Open at Royal Johannesburg & Kensington.

“The Freddie Tait Cup has a rich history, and I would love to get my hands on it,” said Potgieter, but added: “It’s one to really look forward too, but it would be just as awesome to lift the main trophy. It’s great to have two such amazing incentives to play for in this event. I think the course suits my game, because I hit it long. Hopefully I play well this week and give myself a real chance to win at least one of the trophies.” 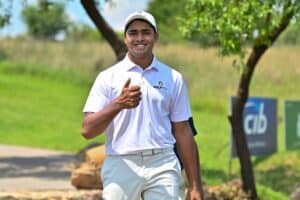 GolfRSA No 1 Premlall, who became the youngest amateur to qualify for and make the cut in SA Open history at the age of 15 years and five months, is the current holder of the coveted silverware after a superb performance in last year’s championship at the Gary Player Country Club.

Having successfully defended his Central Gauteng Open title this month, Premlall is bringing a good dose of confidence to Blair Atholl.

“It’s definitely a goal to defend the Freddie Tait,” said the 19-year-old Glendower golfer. “The course benefits the long hitters, but your short game will have to be on.

“There is a lot of danger, and the greens, while they are fast and true, are very undulating. I think it will take four days of really good ball striking and course management at this layout to accomplish my goal.” 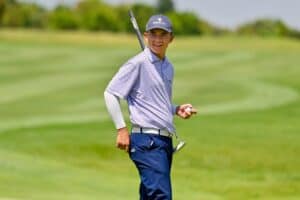 Van der Merwe had to book his berth in the 156-strong starting field the hard way.

Joining over 320 hopefuls who had to vie for 12 spots across three qualifying tournaments, the Magalies Park junior secured his spot with a four-under 68 at the ERPM qualifier.

“It was pretty awesome to arrive here for the practice round this morning and see all the grand stands, and the big banners and the branding. The atmosphere is incredible,” said the reigning Nomads SA Boys U-17 champion.

“The qualifier was tough, but nothing compared to what’s waiting this week. I’m really excited and grateful that I’ll get to have this experience. It’s going to be a great challenge, but I’m going to learn a lot, and no matter the outcome, the experience will help me in my career going forward.”