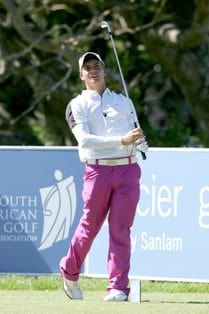 Haydn Porteous and Luke Jerling both recorded fine rounds of 69, three under par, to help move South Africa twenty shots clear of the field after the third and penultimate round of the African Junior Golf Challenge.

Playing Africa’s premier annual junior team competition, in which the best three scores in each team of four counts, South Africa recorded a third round team score of 212, four under par, to finish with a 54 hole score of 650, two over par.

The other player whose score counted for the host nation was Teagan Gauche (74).

Namibia retained their second position with a team total of 670, after a third round team score twelve shots adrift of the South Africans.

Playing the wet and challenging Glendower Golf Club layout, in Bedfordview near Johannesburg, South Africa’s Haydn Porteous, who recorded five birdies in his round today, moved to the top of the individual leaderboard with a 54 hole score of 215, one under par.

Overnight leader, Zimbabwean Scott Vincent, recorded a disappointing 74, two over par, to drop down to second place, one shot behind the leading South African.

Luke Jerling, who was pleased with his round today, especially after having recorded, by his standards, two mediocre rounds prior, moved up to third on the leaderboard on 218, two over par.

The players finished just after two o’clock this afternoon. “With great anticipation the players all headed out to Soccer City for a guided tour of the venue for the opening and closing games for the FIFA World Cup 2010,” said Ann Rycraft, president of South African Golf Foundation.

Back to golf, looking at the variances in team scores highlighted the plight of golf in Africa. “Some of the golfers participating this week are playing on grass greens for the first time in their lives,” pointed Rycraft.

“The first three nations in the team competition are the golf powerhouses of Africa. Zambia is making big strides forward,” she pointed out. “Egypt are determined to improve their standards as well. They have brought with them a full time coach, a luxury not many teams can afford.”

One hundred and sixty seven shots separate the leading team from that in last place, a telling indicator in the varying standards of the ten African teams participating.