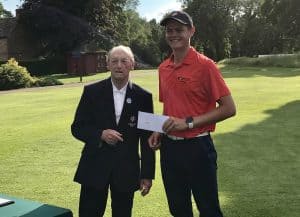 4 June 2018 – Nick Poppleton denied South Africa a second successive victory in the Brabazon Trophy when he chipped in at the second extra hole to beat GolfRSA National Squad player Wilco Nienaber in a sudden-death play-off on Sunday.

Nienaber opened with a five-under 65 at Frilford Heath Golf Club to lie one off the pace and went into the third round three shots back from Frenchman Jeong Weon Ko after a second round 69.

He blitzed the course in 65 strokes in the third round to lead the field at 13-under-par 203.

The South African continued to push the accelerator all the way to the floor and was 18-under through seven holes after an eagle at the par five sixth and birdies at one, five and seven.

Nienaber dropped a shot at eight, but recovered with a birdie at 10. However, he missed the green at 11 to give back another shot and dropped two more at the par-five 14th when his drive disappeared into the rough.

This pulled him back to 15-under and Poppleton, who was five shots back at one stage and had been chasing Nienaber for most of the final round, saw his chance.

The Englishman pulled out the big gun at the drivable par-four 16th and holed the eagle putt. The 24-year-old from Watch closed with a five-under-par 67 to set the clubhouse target at 16-under 272.

Nienaber had a chance to tie Poppleton with a birdie putt at 16, but the ball circled the hole. He did, however, drained an eight-footer at the final hole for a 69 to force the championship into extra time.

“We played the ninth in the play-off and we both missed the green both times,” said Nienaber.

“During the first trip down nine, Nick’s chip ran a couple of feet past the hole and I left mine on the lip. On the second trip, he was even further right, but he chipped it in. I had to make mine to extend the play-off. The ball hit the lip of the cup and lipped out.

“I don’t get hung up on losses, because I have a very simple philosophy about these things. I played really, really well this week and I made very few mistakes, but this just wasn’t meant to be.

“Last year in the Amateur Championship, he reached the semi-final. He realised he had a training club in his bag and called a penalty on himself. That cost him a spot in the final. God had something else in mind for Nick and now he is the English Stroke Play champions. I believe God has something else in store for me, and that’s why I’m glad for Nick, not sad for myself. And I would like to thank my caddie for the final round, our manager David Younge. He did a really great job keeping me calm, but motivated.

“The GolfRSA National Squad UK Tour has been really fantastic tour so far. We are incredibly blessed that Mr Rupert, who sponsors the squad, understands the importance of international experience, and makes this tour possible each year. We’ve played some unbelievable courses and there is more to come. So onward and upward. Let’s focus on the St Andrews Links Trophy and the Amateur Championship, because there is no point crying over spilled milk.”