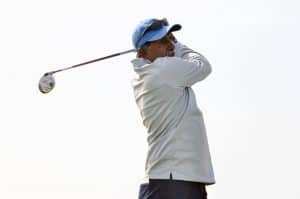 Morgan Phillips will target his first SA Senior Amateur Championship title when he leads the field in the final round at Heron Banks River and Golf Estate on Friday; credit Ernest Blignault.

Phillips began the day alongside Kamps after he matched the Gauteng golfer’s target-setting one-under 71 in the opening round at Heron Banks River and Golf Estate.

The KwaZulu-Natal golfer led Kamps by four shots on three-under-par 139 by sundown.

The 57-year-old Phillips has dramatically cut his playing schedule in the last 18 months to prioritise his family, yet has shown remarkable consistency this season with three runner-up finishes, a third place and two top 10 finishes in six starts to rank fifth in the current Senior Rankings.

He found more of that consistency to overcome a bogey start with nine straight pars.

“I pulled my second shot and hit my first into the face of the greenside bunker,” said the 57-year-old Phillips. “A proper fried egg. I hacked out over the pin and two-putted for a good bogey. It wasn’t the ideal start, but when you still have 17 holes, you don’t sweat the small stuff.”

It was Phillips’ excellent short game that allowed him to pull clear of the pack led by Kamps. He kept the round going with a great par save at the fifth and established himself as the man to catch with a trio of birdies from the 11th hole.

“I pushed my drive almost into the hazard at the short hole,” Phillips said. “I had a chip of about 35 feet and it was up hill. I had to play the shot blind, because I couldn’t see the flag and I hit it to eight inches. That was a big momentum saver.

“The birdie at 11 was stock standard. I hit driver, 5-wood just left of the green and made a good up-and-down, boxing a two-footer for four. I went with the driver down 12 and hit a soft pitching wedge to eight foot and made the putt.

“The 13th was playing short and I hit my driver five metres short of the green and made another good up-and-down for birdie. My last birdie came at 15, where I also chipped it close and holed the birdie putt for four.

The 2015 Players Championship winner closed with successive pars to put in a favourable position in the senior amateur circuit’s flagship event, but is fully aware that even a four shot lead cannot be taken for granted.

“I never get ahead of myself, but I’ve always wanted to win the SA Senior Amateur and this is just about the best chance I’ll have to win the rare double,” said Phillips. “Overall I am playing well and shooting another low score today really helps to build confidence and keep the momentum going in the right way.

“I still feel like I could be holing more putts, though, but I am playing well and I feel like I have a chance to win. If someone else runs hot in the final round, I can’t do anything about it, so I will go out there and play my best and focus on my own game.”

Bryanston’s Kamps cancelled a trio of bogeys on his front nine with gains at one, three and five, but back-pedalled to second on 143 after a costly double at the par-four seventh saw him sign for 73.

Stanley de Beer from Fancourt carded 69, Mount Edgecombe’s Stephen Cullen returned a 73 and Derek Reyneke from Randpark registered a 74 to tie for third on 145.

Ramon Rahme from Glendower landed a share of sixth on 146 with successive rounds of 73 alongside Randpark’s Rurik Gobel and B Chernotsky from Killarney, who posted respective rounds of 70 and 72.