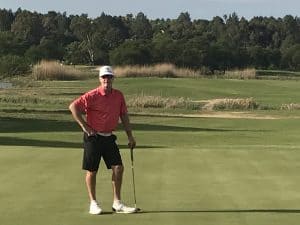 17 October 2018 – Former champion Morgan Phillips made it a two-way tie for the lead with reigning North West Senior Open champion Craig Kamps after the opening round of the South African Senior Amateur Championship on Wednesday.

In-form Kamps from Bryanston fired an eagle and a trio of birdies on a windy day at Heron Banks River and Golf Estate for the clubhouse lead in the early afternoon. 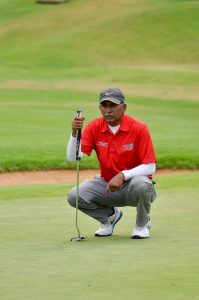 Phillips, who chased Kamps all the way to the finish line at Orkney Golf Club last month, was two-under through the turn. The Mount Edgecombe golfer hit a mid-round wobble with a double bogey at the first, but boxed a birdie putt at the eighth to match Kamp’s target.

At least 10 players are within four shots of Kamps and Phillips, including Randpark senior Derek Reyneke, who birdied his final hole to finish one off the pace.

Stephen Cullen and Basil Naidoo from KwaZulu-Natal and Wingate Park’s Pieter Cooper tied for fourth on one-over, Wilhelm de Kock from Humewood and Glendower’s Ramon Rahme are a further shot adrift, while B Chernotsky from Killarney, Bruno van Eck from Wanderers and former SA Mid-Amateur Stroke Play champion Graeme Watson from Ebotse rounded out at the top 10 on three over.

Kamps started his debut in the flagship event on the back nine.

He cancelled a birdie at 11 with a bogey at 12, but got his round back on track with an eagle-birdie combination at 15 and 16 to lead the field for the first time.

“I hit a great drive down 15 and 6-iron to 25 foot and boxed the eagle putt,” said the 53-year-old former Sunshine Tour professional. “At 16, I hit rescue down the middle, an 8-iron to 10 foot and holed the birdie putt.

“It was a warm afternoon, but fairly windy; about a club and a half wind, and the first nine holes played significantly tougher. I started well with three pars, but had bogeys at four and five. I managed a birdie at the ninth, which was a nice way to finish. I hit a 3-wood approach to 30 foot and two-putted.”

Kamps is currently sixth and Phillips fifth in the current Senior Rankings.

Both players are vying for inclusion in the four-man team that will travel to India at the end of November for the third Fellowship Cup.

“Victory would go a long way in securing a spot on the Senior Team, but it’s just day one and we have a very tight leaderboard,” said Kamps. “There are a bunch of solid players behind Morgan and me, so the race is far from won. I am glad, though, that I’ve put myself in a challenging position early on.”