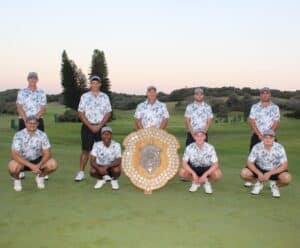 KwaZulu-Natal wrapped up their third win in four years when they dominated the SA Country Districts Inter-provincial Tournament at East London Golf Club.

7 June 2021 – KwaZulu-Natal wrapped up their third win in four years when they dominated the SA Country Districts Inter-provincial Tournament at East London Golf Club. A clean sweep for the KZN team saw them finish the week on eight points, comfortably clear of second-placed Boland.

Team manager Wynand de Swardt was delighted with the focused performance of his charges in what is his last event.

“It was such a memorable week,” said De Swardt. “We went to East London with a mission to win and we did that. I think that the experience we had in the team was a massive help, especially in the match play format.

“A lot of young players try to take on these short par fours and end up getting themselves into trouble, but the more experienced players know to keep the ball in play and use course management to their advantage. That’s what we did really well.”

North West finished in third, with Northern Cape fourth and Free State taking the wooden spoon and, with it, relegation to the B Section next year. 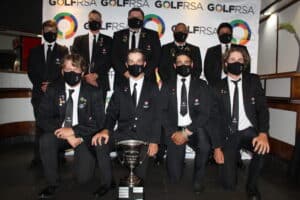 They will be replaced by Southern Cape, who dominated the B-Section with four wins from four.

A good mixture of youth and experience saw the team claim promotion with two days to spare as they beat Mpumalanga, Eastern Province and hosts Border in the first three days. Their final round was essentially a dead rubber, but the team from Southern Cape made it four from four with a healthy win over Limpopo.

Nineteen-year-old Damian Osner, who was a member at East London for a number of years, was the team’s top scorer with an impressive seven-and-a-half points from a possible eight.

“We’re delighted to have won the B Section,” said team manager Heinrich Lourens. “The quality of golfers at Country Districts, across both divisions, is really good and even though its looks on paper as though we ran away with it, the games were mostly very close.

“Since 1970 we have only won the shield three times, and the last time was back in 2004, so we were desperate to get the result. Next year we will try to consolidate our position in the A-Section before we start to aim a little higher and attempt to win the A Section for the very first time.”