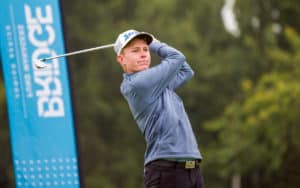 On a day when a lightning storm delayed play by 45 minutes, 18-year-old Ryan van Velzen produced some electricity of his own with 7 birdies and 2 eagles to win the Bridge Fund Managers Junior Series at ERPM on Saturday 26 October 2019.

“Earlier this year I won the EGU Closed at ERPM with a first round of 65, so I knew I could go low around the course. I played aggressively as I knew there was a strong field present with a number of GolfRSA National Squad members,” said Ryan, a member of Benoni Country Club.

The #BridgeJuniorSeries event did indeed attract a high-class field including the likes of Kian Rose, Kiera Floyd, Casey Jarvis, Nikhil Rama and Carl Mwale, so Van Velzen needed to be at his best to shoot 66 for the win.

An eagle-birdie finish by Chris Gutuza of King David Mowbray Golf Club saw him place second just a shot back. While Yuvrav Premlall of Glendower Golf Club and Nikhil Rama of Bryanston Country Club – who had a hole in one on the 12th – tied for third after matching 69s.

But Van Velzen was the star of the day and got his round off to a perfect start with an eagle 2 on the opening hole. “I hit driver as I knew I could fly the trees guarding the green. My ball finished just short and I hit a perfect chip for the eagle,” he explained.

Playing alongside Rama, Van Velzen lost ground after he dropped a shot on the 11th and then Rama pulled further ahead with a spectacular ace on the par 3 12th.

“I knew I could make some birdies coming in,” Van Velzen explained. “So I stayed aggressive and birdied 12, eagled 13 and birdied 14.. Then finished with birdies on 17 and 18 for a 30 on the back nine.”

The eagle on the par 5 13th was impressive and decisive. “A good dive downwind left only a sand wedge, which I hit to 3-foot. I knocked in the putt and with Nikhil making bogey, there was a 3-shot swing in my favour,” said Van Velzen.

With the win the Ekurhuleni junior qualified for the Bridge Junior Series regional final in April 2020, where he will compete for the ultimate prize – an all-expenses paid trip to the North and South Junior Championship at Pinehurst, USA in July 2020. If he wins the regional final Ryan will make a second trip to Pinehurst, where he and eventual winner Tyran Snyders represented the South African challenge in July this year.

“I struggled with my putting when I played in the USA earlier this year. Even in my round of 68 at Pinehurst #2, I left a number of shots on the course,” said Van Velzen. “So I am really motivated to win another crack at Pinehurst.”

Paul Stewart, Chief Executive at Bridge Fund Managers, said: “Ryan was a terrific ambassador for the Bridge Junior Series at Pinehurst earlier this year and I am sure he is relishing the opportunity to secure a return visit by winning our regional finals.”

The juniorseries.bridgefm.co.za launched in 2017, is managed by the SA Golf Development Board and endorsed by GolfRSA. Open to boys and girls in the U13 and U19 divisions, the Series is played across 18 tournaments hosted by leading courses. Prizes are sponsored by TaylorMade Golf South Africa.