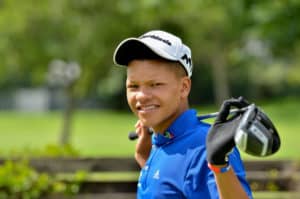 With the win the 16-year-old South African Golf Development Board member – a pupil at Curro Kathu – qualifies for the regional final of the #BridgeJuniorSeries in April.

The ultimate prize is an all-expenses paid trip to the North and South Junior Championship at Pinehurst, North Carolina, which has hosted three US Opens, the PGA Championships and the Ryder Cup.

The key to his triumph in Robertson was keeping the ball in play and limiting mistakes, especially when the wind got up on the back nine.

Pedro managed his game to near perfection, reeling in birdies on the fourth, ninth and 10th holes and he stayed bogey-free until the final hole. However, with two-shot lead going down the last, the single blemish on his scorecard on the 18th still left him at the top of the leaderboard ahead of Malan Potgieter of Kirkwood Golf Club.

SAGDB stable-mate Keanan Keffers of Theewaterskloof Golf Club tied for third with Murray Boast of Milnerton Golf Club, who eagled the 18th hole for a matching 73.

“I am very excited to have the opportunity to play in the regional finals,” said Pedro, who plays out of Sishen Golf Club in the Northern Cape.

“My goal for the 2020 season is to break into the Top 20 of the GolfRSA National Junior Rankings and this win gives me a lot of confidence to pursue my goal. Long term, I hope to play on the European Tour and win a Major.”

“Well done to Lyle who travelled a long way to compete in Robertson and was rewarded with a victory and spot in the regional finals,” said Paul Stewart, Chief Executive at Bridge Fund Managers.

The #BridgeJuniorSeries launched in 2017, is managed by the SA Golf Development Board and endorsed by GolfRSA. Open to boys and girls in the U13 and U19 divisions, it is played across 18 tournaments hosted by leading courses countrywide. Prizes are sponsored by TaylorMade South Africa, who has partnered with the series since its inception

Golfers have a few more opportunities to qualify for the regional finals. Visit juniorseries.bridgefm.co.za for the full schedule and entry mechanism, or contact Peter Little of the SAGDB on littlegolfers2@gmail.com.