Pearson putts his way to the top 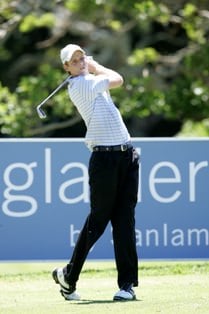 The 18-year-old from Kwazulu Natal holed his way to an eagle and six birdies, including four on the trot from 13 to 16, and dropped just one shot on his way to a seven-under-par 66.

“After a 74 in the first round, I wasn’t expecting too much today, but the putter warmed up early,” said the Royal Durban Golf Club player. “I missed a two-footer at the second but then I holed a long one at the 11th for eagle and that got the ball rolling. The only bogey on my card was a missed putt.”

The Durban teenager is confident ahead of this week’s match play.

“My match play record is quite good; I’ve definitely won more than I have lost,” said Pearson. “Two years ago I won 11 out of 12 singles matches at the Junior Interprov and I’ve won the KZN Junior Match Play twice, so I am pretty confident with the match play stage.”

“The course is playing pretty short without the wind, so I would prefer it to blow a bit,” said the 33-year-old, who has won the club’s stroke play and match play championship several times.

“I hope the wind comes up over the next few days. It makes the course that much tougher to play and it should give us locals a little home course advantage.”

Although he will probably miss the cut, this year’s SA Amateur will be a memorable one for South Korea’s David Kim. The 18-year-old who lives in Edgemead and plays out of Bellville Golf Club was smiling broadly after recording his first hole in one in today’s second round.

“The second was playing into the wind, so I hit a solid 5-iron from the tee,” explained Kim. “The ball made it over the bunker but caught the little slope just behind the trap and rolled down to the hole. It sat on the edge for what felt like hours before it dropped.”

Overnight leader Allan Versfeld, playing in the afternoon, climbed to eight-under after a brace of birdies at the first and third but the 19-year-old from Heidelberg lost the advantage with back-to-back bogeys at the seventh and eight.

At five under and staying in touch with the leaders are Germiston’s Donovan Pearce, Jaco Greyling from Tzaneen, Thabo Maseko of Johannesburg and Britain’s Laurie Canter.