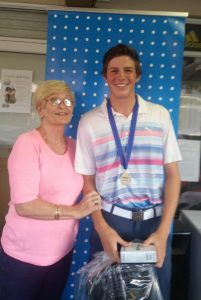 Sean, who lives in Pietermaritzburg, travelled up from KwaZulu-Natal to compete in the event, and his reward is a sought-after spot in the regional finals of the Junior Series, to be played at ERPM Golf Club on Saturday 6 April 2019.

The ultimate prize is an all-expenses paid trip to compete in the glittering Junior North and South Championship at Pinehurst, USA in July this year.

“I would definitely say that the thought of playing at Pinehurst was a motivating factor. In 2018 my good mate Nikhil Gopal won the regional final and went on to compete at Pinehurst. So, I would really like to follow his success,” says Sean, whose superb 66 saw off the challenge of Casey Jarvis who shot 68.

The first of his eagles was on the 5th hole, which was playing into the wind, but a great drive left him with just a 6-iron to the green. “I played a cut which the wind brought back perfectly, and it landed about 3 feet away – so a nice easy tap in,” said Paxton.

The eagle on the 16th was critical as he was tied with Casey. Feeling the pressure, he needed to hit a draw over the fairway bunker to have a clear shot to the green.

“The drive was my best shot of the day as it went miles down the fairway, leaving just a 145 metres shot for my second,” he explained. “I took a 9-iron ,which landed a foot from the hole and spun back to six feet. I took a deep breath and boxed the putt with a small fist pump to celebrate.”

Paxton, a member of Victoria Country Club, said the key to his low scoring round was his accuracy off the tee and a hot putter. “I made many long par putts and I got up and down every time from the edge of the green.”

Coping with pressure is a challenge for any level of golfer and Sean chooses to “stay in the moment and never let his head hang low”. He also adopted the attitude of his idol Rory McIlroy and walked with a bounce which kept his energy up and focused.

“Sean and his family made a big sacrifice to travel up from KZN to compete in Germiston, so we are delighted that this commitment to the Bridge Fund Managers Junior Series paid off and we look forward to seeing this talented young golfer perform in the regional final,” says Paul Stewart, Chief Executive at Bridge Fund Managers.

The #BridgeJuniorSeries launched in July 2017 with 16 tournaments countrywide featuring Under-13 and Under-19 divisions for boys and girls. Endorsed by GolfRSA, the series is managed by the South African Golf Development Board.

Written by Doug Carew on behalf of the Bridge Fund Managers Junior Series.