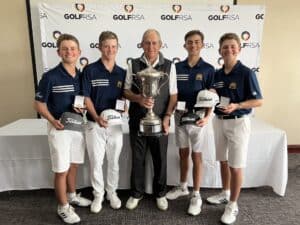 12 August 2022 – The youthful team from Paul Roos Gymnasium celebrated their first victory in the SA High School Championship this August, edging out the cream of high school golf in South Africa for the title at Humewood Golf Club.

A total of 23 teams from 22 tertiary education institutions teed it up in Gqeberha for glory in this popular 36-hole tournament.

With the three best scores to count per round, there was little room for mistakes and the schools put on an incredible display of shot-making at the famous links course.

Over 36 holes of intense rivalry, twin brothers Andries and Nicolas van der Vyver (15), Jack Brugman (17) and Gerard Hartman (15) combined for a total of three-under-par 429 to come up trumps.

“I am so incredibly proud of these four young men, who really punched well above their weight to bring the trophy to Boland,” said the delighted team manager Tienie Hendriksz. “They were exemplary ambassadors for Paul Roos, both on and off the course, and they really did the school proud.”

The only team to finish with a subpar score, the foursome from Paul Roos Gymnasium opened with round of 220 and slept on a slender one-shot lead over McKinley Read, before powering their way to victory with a superb final round 209.

Andries anchored the side on both days with rounds of 70 and 69. Hartman and Nicolas carded respective rounds of 74 and 76 on day one, while Brugman matched Andries with a 69 on the final day and Nicolas returned a 71.

“We worked really hard to get to the final and to come away with the title is the best feeling in the world,” commented victorious captain Brugman. “Everyone contributed to the victory. It’s really great to know when you are out there, and you have a bad hole or things just don’t go your way, that your team-mates will have your back.” 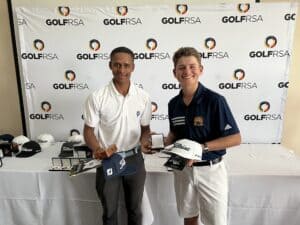 Andries van der Vyver gave Paul Roos another reason to celebrate when he finished in the lead in the Individual Competition, but the 15-year-old had to share the stage with Valentine from Border after the South African Golf Development National Squad player matched his five-under-par 139 total.

The winning pair played together in the final round, but Valentine denied Van der Vyver the outright title with a superb birdie finish for a four-under-par 68, which also earned the Grey High scholar the low round honours for the tournament.

“It was a great contest with Andries,” said Wedgewood’s Valentine. “We really pushed each other all day. I had the upper hand until the 15th where he hit it to three feet and holed for an eagle, so I knew I needed to find a few birdies coming home.”

Valentine birdied 16 to pull level with Van der Vyver but the Stellenbosch junior edged ahead with a birdie of his own on the par-five 17th.

“Devon hit two great shots on 18 and holed a huge birdie putt. It was an outstanding finish to a really great round. We both had so much fun out there,” said Van der Vyver. “I am so proud of our team and grateful that I could make a contribution. A huge thanks to our manager Mr Hendriksz, for all his hard work, and a big thank you to the principal and staff of Paul Roos for all their support.

“I also want to thank GolfRSA for hosting a great tournament. The guys really enjoyed themselves. The vibe on and off the course was awesome. And to Humewood, thank you for giving us a fantastic experience at such an incredible golf course.”