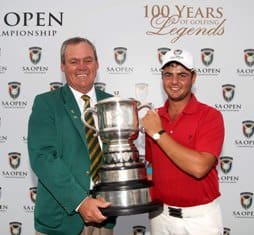 In most South African Open Championships the Freddie Tait Cup, which goes to the leading amateur, is fairly clear cut by the time the final round commences. It is also pretty uncommon to find the two leading amateurs drawn together in the same three ball for the last round, which is a seeded draw based on score.

All these usual occurrences went out the window at Durban Country Club on Sunday. The two leading amateurs, after thirty six holes, were Dean O’Riley and Dylan Frittelli, both on four under par 140, drawn together in the same three ball for both the third and final rounds.

In an enthralling contest between two talented amateurs, twenty one year old O’Riley, who plays his golf out of Ebotse Golf and Country Estate in Benoni, overcame Dylan Frittelli to win the Freddie Tait Cup by one shot.

Playing both the third and fourth rounds on the same day, after a rain delayed start which saw the first round conclude a day late, the two amateurs did not have to watch the leaderboard, they only had to watch each other.

“It was like playing match play,” said a relieved O’Riley after his round.

The Benoni player started the third round the better of the two amateurs. He birdied two consecutive holes from the thirteenth (his fourth hole as they started on the tenth tee) but bogeyed the fifteenth.

Frittelli dropped shots on holes twelve and fifteen allowing O’Riley to open up three shot lead on his amateur ‘opponent’. However an eagle on the par four eighteenth hole (nineth hole played) by Frittelli to O’Riley’s birdie, on the same hole, gave the Benoni player a two shot cushion at the turn.

A birdie and a bogey by O’Riley on the home stretch was matched by Frittelli. The former finishing with a 70, two under par, and a 54 hole aggregate of 210, six under par. Twenty year old Frittelli, who is currently studying, on a golf scholarship, at the University of Texas, played his third round in regulation 72 for a four under par 54 hole aggregate of 212.

Into the final round the two gladiators went. Frittelli birdied the tenth (their first hole), bogeyed the eleventh and birdied twelfth to go five under for the tournament. O’Riley dropped a shot at the eleventh to also go to five under.

O’Riley dropped a further shot at the seventeenth hole (their eighth), which enabled Frittelli for the first time in twenty six holes to edge ahead of the player ranked third on the latest South African Golf Association’s Player Rankings.

This was short lived as a birdie by O’Riley on the short par four eigthteenth saw the two players draw level again.

Frittelli could only muster up regulation golf coming home, in fact he did so over the last fifteen holes he played. This was not the kind of golf he needed to produce if he was to make sure of holding onto the Freddie Tait Cup for two years in succession, as he had won the Cup the year prior.

O’Riley’s birdie on hole one, a par four, the tenth hole they played, proved decisive. With a shot clear of Frittelli, O’Riley proceeded to match his rival shot for shot over the closing holes.

“I am really chuffed to have won this,” said and elated Dean O’Riley after his round.

“It could have been so different if we had not been paired together. I played well, missed some crucial putts which I guess was the same for both of us. I could not have asked for a better way to end my amateur career.”

O’Riley is lost to amateur golf as he turns professional next year and will play on the Sunshine Tour.