O’Riley remains the man to beat 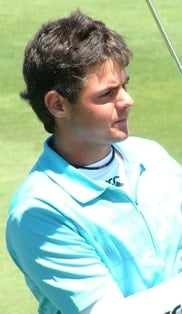 Pre tournament favourite Dean O’Riley gave a clear indication to all competitors in the Glacier SA Amateur Championship that he is the player to beat after his fine performance in the first round of the match play played at Benoni Country Club today.

It was not the fact that O’Riley, from Benoni Lake Golf Club, beat veteran Steve Williams 5 and 4 that was impressive, it was the fact that he was seven under par after 14 holes that left one in no doubt as to his current form. The No. 1 ranked players on the South African Golf Association (SAGA) Player Rankings turned 2 holes up, went on to birdie 10, 13 and 14 and consequently move through to the second round.

“He really played like South Africa’s top ranked golfer,” said Steve Williams his defeated opponent after his round. He shrugged his shoulders when stating even though he was two under par for his 14 holes, it made no impression on the current Gauteng North Open and Free State and Northern Cape Open champion.

Ruan de Smidt provided one of the biggest surprise performances today when he knocked out the winner of the Proudfoot Trophy (36 hole qualifier that precedes the match play), Frenchman Johann Lopez-Lazaro, 2 and 1. The 19 year old Krugersdorp Golf Club member finished on the cut score, in the Qualifying, namely 149, five over par, and successfully negotiated a playoff, amongst 13 other players on the same score, who played for 9 spots in the match play field.

De Smidt turned one down and then proceeded to play sparkling golf, recording birdies on holes 10, 12, 14, 15 and 16. He was two up playing hole 17, his second shot hit a bunker rake, in its approach to the green, and as luck would have it when things are going your way, it bounced onto the green. Speaking through a translator after the match, Lopez Lazaro shrugged his shoulders and disappointingly acknowledged that it was not his day.

Another surprise result was that of Derik Ferreira, of which much was expected. He lost to 21 year old JJ Senekal from Stellenbosch Golf Club, 3 and 2. Ferreira turned one up, however on hole 10 Senekal chipped in from 30 metres out for an eagle to go all square. Birdies on holes 11, 14 and 16, by Senekal, saw him safely through to the next round.

Another player who put in a commanding performance today was that of 23 year old Westlake Golf Club member, Aaron Russell. He beat Mark Lloyd 4 and 3. He played some marvellous golf but interspersed it with some less impressive stuff. After hole six he was four up on his opponent. He then lost three holes in a row from hole 7 to turn one up. The likeable Russell then birdied 10 to go two up, but went back to 1 up after losing the next hole. He then strung four birdies together from hole 12 to shut out Lloyd and move through to the next round.

Other notable performances was Adrian Ford beating Michael Dixon 2 and 1, Ryan Dreyer, who did a lot of the pace setting in Qualifying, dealt with Rae Mackie 3 and 2, Steven Ferreira beat Stephen Holder 2 and 1 and Leon Knoll overcame Frederic Abadie, of France, 3 and 2.

Tomorrow sees the second round being played, 32 players in 16 matches, commencing at 07h00. In the afternoon, from approximately 11h30, the last 16 players will compete in third round made up of 8 matches. All matches are decided over 18 holes except the final, which will be played on Friday over 36 holes.