O’Riley has another big win 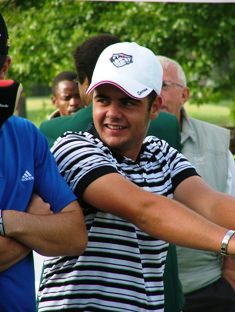 BENONI (4 March 2009) – Dean O’Riley maintained his status as the favourite for this week’s Glacier SA Amateur Championship with a convincing second round victory at Benoni Country Club on Wednesday.

O’Riley beat Bryn Flanagan 4 and 3 to advance to the third round, where he will meet Daniel Gouws. O’Riley’s victory followed his 5 and 4 win over Steve Williams in the first round.

“It’s nice to have these big wins,” said the number one ranked amateur in the country, who chipped in for birdie on the seventh.

“I played nicely, although I had a couple of mishaps. But it’s all good. I putted well again and kept it going.”
Western Province golfer Adrian Ford kept his challenge on track with a 2 and 1 victory over Daniel Barrett.

“It’s good to get two wins under the belt and hopefully the golf just gets better from here on,” said Ford, who is up against good friend JJ Senekal in the third round later today.

Leon Knoll beat Nicol van Wyk 2up to complete the list of the top three amateurs in the country progressing to the third round.

The surprises from the round saw Jake Redman knocked out and Ryan Dreyer upset one of the country’s top amateurs.
Redman was beaten 5 and 4 by Pieter Moolman, while Dreyer beat Steven Ferreira 5 and 3.

“That’s a good win for me,” said Dreyer, who is making his comeback to the game after abandoning life as a tour professional and then regaining his amateur status following two years away from golf.

“I don’t know these guys at all. So last night I went on the internet to find out more about Ferreira. I saw he’d finished top five in six of his last eight tournaments, so I was a bit worried to say the least.”

“It wasn’t the best of starts and I thought, oh no, this is going to be really embarrassing. But I ground it out, as I always do. He made one or two mistakes and let me back in, so I took full advantage.”

As for his knowledge of his third round opponent, Riekus Nortje, Dreyer admitted, “I’ve got no clue who he is. I’m playing the guy who’s holding the clubs on the first tee”.