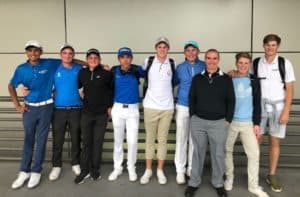 12 May 2018 – The GolfRSA Juniors are determined to chase down a fourth SA Challenge Cup title, but the defending champions will face strong opposition in the 16th edition of the team event at Irene Country Club from 14-18 May.

Vorster, seventh in the SAGA Junior standings, won the Reply Italian U-16 and the Nomads SA Boys U-15 Championships last year and took third in the international African Amateur Championship at Glendower in February.

Bridge Fund Managers Junior Series winner Rose enjoyed top 20 finishes in the first two Nomads National Order of Merit events, while Van Wyk hopes to follow in the footsteps of older brother Alex, who was a member of the victorious GolfRSA team in 2017.

“Gauteng North won in 2016 and they are probably the biggest threat,” said Vorster. “They have the home course advantage this year and they will come at us with everything they’ve got.

“Central Gauteng and Western Province are always strong, and the University Sport South Africa (USSA) team has a lot of experience with guys like Altin van der Merwe, Calvin Ferreira, Jason Broomhead and Reece Haickney, who captained our Junior side in last year’s tournament.

“The GolfRSA Presidents Team is definitely the strongest team since they began competing in the SA Challenge Cup since 2013. I think this team is the dark horse in this year’s tournament. The competition will be tough. We’ll have to go out strong in the foursomes and then back it up with good results in the singles, but I’m very confident in our ability to defend the title.”

Gounden is back for a third year, while Mwandla and Gqira make a second appearance for the GolfRSA Presidents team. Meanwhile Croy is lining up in his fourth SA Challenge Cup, having represented the GolfRSA Presidents Team for three years. Mokoena, Stevens and Premlall also graduated the team after their debut at Atlantic Beach last year.

The defending champions will face the host union on day one, Central Gauteng goes up against USSA and Western Province take on the GolfRSA Presidents Cup team.