Oosthuizen wins on the last hole 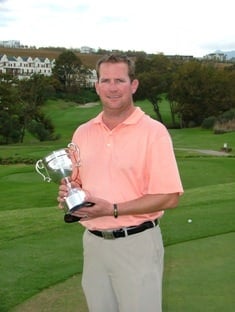 Going down the final hole of the final round, 35 year old Rob Oosthuizen knew he had to get a birdie if he was to stand any chance of winning the 2009 South African Mid Amateur Championship, played at De Zalze Golf Club, outside Stellenbosch, today.

However that was not to be.

Neil Homann whittled his one shot lead away by taking two shots to get out a greenside bunker ending up with a double bogey on the final hole.

As a result, all Oosthuizen needed to do was to record a par to win by one. This the Western Province and Strand Golf Club member duly did. He finished with a final round of 76, four over par, and a 72 hole total of 292, four over par.

Homann, who is also the assistant executive director of the South African Golf Association and a former professional played the last five holes in five over par. “You cannot win tournaments like that,” lamented the former South African Amateur Stroke Play Champion.

It was an exciting final round struggle between the two former professional golfers.

It started badly for the overnight leader, after three holes Oosthuizen was two over par and trailing Homann by one shot.

By the turn Homann was two shots clear.

Homann three putted hole 11 for a bogey and two holes later Oosthuizen recorded a birdie to draw level with the Central Gauteng player.

On the par 5 14th hole Homann sank a 5 metre putt for birdie to go one ahead. His lead was short lived when on the very next hole he hooked his drive out of bounds and ended up with a double bogey. Oosthuizen played regulation golf, with a two shot swing he ended up in the lead by one.

Oosthuizen had trouble on the penultimate hole, he hit his second into a hazard, on the testing par 5. He took relief, with no line to the green, he chipped out onto the fairway ending up recording a double bogey. A par from Homann gave him back the one shot lead he held three holes prior.

“I started playing again over the last eight months or so,” said Oosthuizen, who won the Transvaal Amateur in 1998. He had a three year spell in the professional ranks, without much success. He got his amateur status back in 2004.

“Grant Hepburn has been helping me and it has really instilled new life into my game. You can see it in the results,” said the elated and newly crowned champion.