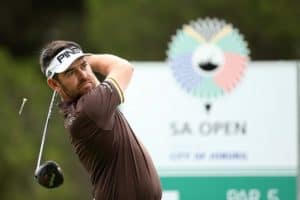 Defending champion Louis Oosthuizen has a one-shot lead heading into the final round of the 2020 SA Open hosted by City of Joburg at Randpark Golf Club; credit Shaun Roy.

11 January 2020 – SA’s Louis Oosthuizen is poised to defend his South African Open title after a bogey-free seven-under 64 netted him a one stroke lead on 15-under in the third round at Randpark Golf Club on Saturday.

Lurking a stroke adrift is England’s Marcus Armitage, and two behind is SA’s Jaco Ahlers on 13-under.

Primed to defend his trophy and the heavy favourite going into the final round, Oosthuizen said it would be a significant achievement in his already glittering list of achievements.

“To have my name on that trophy a second time would mean the world to me,” said Oosthuizen after his round.

After a frustrating second round 69 on Friday, the 2010 British Open champion made sure he made a fast start to his day with three birdies in a row from the second. A pitch-perfect approach on the ninth setup another gain to go out in four-under.

“I worked a little bit on the putting green yesterday afternoon, and got the rhythm back. So it was nice to go out and hole a few putts. I was disappointed yesterday, the way I was hitting the ball I should have shot 66 easily.”

While he made further gains at the par four 11th, and par five 12th and another at the par five 14th – thanks to a superb greenside bunker shot – it was a couple of recovery shots that kept his round together.

Hitting a fairway wood off the par four 13th, the 37-year-old blocked his tee shot right. He then played an incredible low punch shot to find the putting surface which virtually ensured he saved par.

On the par four 16th, this time Oosthuizen pulled his tee shot well left. And though he had a tree right in front of him and another much larger willow just beyond his ball – a soaring nine-iron meant he found the heart of the green once more.

“I was trying a little bit too much with the five-wood off the tees. I was just going at it way too hard. It’s something I need to tone back for tomorrow. But I was lucky on 16 to have a clear shot to the green. On 13 I had to wangle a little shot out there. I’m just happy I made pars on those holes.

On 18, he also produced a neat greenside bunker shot to four feet – before nailing the putt to ensure he held onto to his narrow lead going into the final round.

Written by Michael Sherman and released by Lali Stander on behalf of GolfRSA.