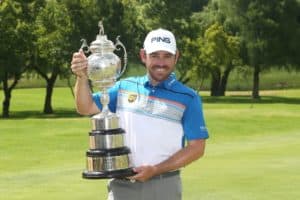 Louis Oosthuizen after winning the South African Open hosted by the City of Joburg in December 2018. Oosthuizen returns to Randpark Golf Club this coming week to defend his title and take up his role as the new Player Host of the tournament. Credit: Sunshine Tour.

Louis Oosthuizen heads to Randpark Golf Club this week as the defending champion and the new Player Host of the South African Open hosted by the City of Joburg, and which this year is a true showcase of the brightest stars of the current and future generations of South African golf.

Oosthuizen joined an exclusive club with his six-stroke victory at Randpark in December 2018.

The South African Open was played twice in 2018, in January and December, with the December edition forming part of the 2018-19 season.

His win saw him become only the fourth South African to win both The Open Championship and South African Open hosted by the City of Joburg, following Bobby Locke, Gary Player and Ernie Els.

From 9-12 January he will join an even more exclusive club as he follows Els as the new Player Host of the second oldest national Open in golf, which is co-sanctioned by the Sunshine Tour and European Tour.

This year the championship will also make history when the official pro-am is hosted at Soweto Country Club for the first time, exposing a global audience to the recently refurbished course designed by Gary Player and which, in partnership with the South African Golf Development Board (SAGDB), is now helping to stimulate the growth of golf in this iconic township.

Oosthuizen’s role is a new chapter for the golfer who is currently the highest ranked South African in the world at number 20, and it coincides perfectly with the Sunshine Tour’s new #Gr8nessBeginsHere campaign reflecting the Tour’s status as the birthplace of golf’s next global stars.

This year’s field does indeed include the best of the current and future stars of South African golf.

Wilco Nienaber, Deon Germishuys, Thriston Lawrence and Garrick Higgo are amongst the next generation of South African professionals that will be challenging for glory in their national Open.

The amateur field is also incredibly strong and a testament to the structures that exist within GolfRSA to keep producing world-class golfers.

The amateur field will be led by South African number one Jayden Schaper; Jovan Rebula, the winner of the Freddie Tait Cup in the December 2018 edition and which is awarded to the leading amateur at the end of the championship; teenage sensation Yurav Premlall, who in December 2018 made history as the youngest amateur to qualify for the South African Open at the age of 15 years and 5 months; Casey Jarvis, Martin Vorster, Samuel Simpson, Jordan Duminy, Kyle de Beer and Christo Lamprecht.

The championship will also once again form part of The Open Qualifying Series as it takes its place amongst 16 events in 11 countries and across 5 continents that offer qualifying opportunities for the 149th Open at Royal St George’s in July this year.

Issued by Tournament Media Manager Michael Vlismas on behalf of the SA Open, hosted by City of Joburg.