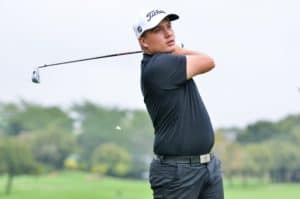 Rigardt Albertse beat Niko Koster 6 & 4 to help North West to a 10 – 2 victory against Limpopo in the third round of the SA Country Districts at Potchefstroom Country Club; credit Ernest Blignault.

17 May 2018 – North West continued an unbeaten run in the third round to cement their number one position in the A-Section at in this year’s SA Country Districts Inter-Provincial, while Northern Cape held on to the top spot in the battle for promotion at Potchefstroom Country Club on Wednesday.

North West mowed down Limpopo 10 – 2 in a pretty one-sided match.

Christo Harms, Oliver Goldhill, Herman Anderson and Albert Britz did the rest, while Vincent Olley and

North West, with 6 points, has a fourth round bye and a handy 3 point lead over KwaZulu-Natal.

After enjoying a rest day in round three, the coastal side will have to step it up against Free State, who showed great courage to beat Mpumalanga 7.5 – 4.5.

After losing the Foursomes 1.5 – 2.5, Franco Froneman beat Ryk Lacock 5 & 3 to get Free State back in the match and Lourens Erasmus defeated Rikus Nel 4 & 3 to keep the momentum going. Bernard Hattingh, Ge-Rico Muller, Josef Fourie and Pieter Cronje claimed 4 more points that guaranteed the win and handed Free State third spot in the standings on 2 points.

Northern Cape took advantage of Boland’s third round bye to strengthen their bid for promotion.

The log leaders defeated Southern Cape 7 – 5 to top the log with 6 points, 2 points clear of Boland, who face Eastern Province in today’s fourth round.

Andries Kori took out Marlo Pienaar 6 & 5, Allan Toy closed out a 5 & 3 win and Geoffrey van der Merwe won 2 & 1 to boost the team’s tally to 5.5 points. Southern Cape’s Marius de Lange, Aiden Boon and Alex van Wyk hit back with three victories, but it was too little, too late.

NJ van der Walt made it 6.5 when he beat Meyer Potgieter 1-up and and Drikus Gous squared against Lukas Steyn to ensure the win.

Eastern Cape stretched a 2.5 – 1.5 lead in the Foursomes to victory over Border that moved the team into  third spot in the standings with 2 points.