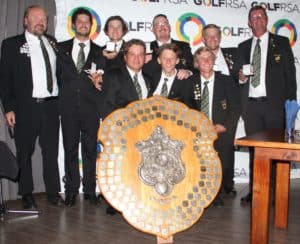 19 May 2018 – North West delighted the home crowd with a hard-fought for final round victory over KwaZulu-Natal to lift the SA Country Districts Inter-Provincial title at Potchefstroom Country Club on Friday.

The local heroes came out guns blazing with 7 – 5 victories against Free State in the opening round and Mpumalanga on day two. A thundering 10 – 2 result against Limpopo on day three took North West to the top of the log on six points, but KwaZulu-Natal knocked out Free State with 8 – 4 to get back into the title fight.

The two teams headed into the final round with North West leading by one point and an advantage of three games points (24-21).

“We knew the final day would be tough,” said North West manager Leon Bevan. “It’s never easy to win at your home course. There is so much added pressure on the players to perform in front of their supporters.

“Going into the final round, I asked the players keep their heads in the game. It’s only over when the final putt drops, so we needed every player to stand up and deliver. I couldn’t be more proud of the way they handled themselves against KwaZulu-Natal to win the match 7 – 5.”

Christo Harms and Rigardt Albertse retaliated, defeating Coenie Erasmus and Sean Baker 3 & 2 to level the score and Herman Anderson partnered Aldre Terblance to a 2 & 1 put North West ahead. Oliver Goldhill and Ray Janse van Rensburg birdied 10 and 11 to go 2-up and rode the advantage take the final game 1-up.

“We had a 3 – 1 lead heading into the Singles and we had to protect our lead, because KZN on the back-foot is dangerous,” said Bevan. “We knew they would come at us hard, but I had confidence in the team to deliver the four points we needed to win.”

Once again, it was KwaZulu-Natal who bagged the first point.

Jason Gilliver mowed down number one Britz 5 & 4, but Krugel hit back to keep North West in the driver’s seat when he knocked out Erasmus. Anderson eliminated number two Hillerman 3 & 2 for their fifth point, but Graham Fabricius, Christopher Thorpe and Thomas Lovett all won 1-up to bank three crucial points for KwaZulu-Natal.

“I am incredibly proud of this team. They jelled incredibly well, especially in the Foursomes, and they really supported each other. Their never-say-die attitude carried us to the winner’s circle.

“Congratulations to Northern Cape and a big thank you to everyone for the spirit and camaraderie shown this week. I would also like to thank North West Golf Union president Peet van Schalkwyk and Coenie Schoonhoven. It’s amazing to be part of a union who supports their players in the way you guys do. All your commitment is really appreciated.”

The first match of the final round went the way of Free State, who edged out last year’s B-Section winners Limpopo 6.5 – 5.5 to finish third in the final log. Mpumalanga was relegated.