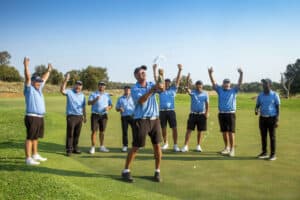 15 October 2021 – North West had only one hurdle left to cross on the final day and they did so in style, sweeping to an undefeated victory in the B-Section in the ninth South African Mid-Amateur Inter-Provincial Championship at Elements Private Golf Reserve.

The 2021 champions sounded a warning on day one when they downed Northern Cape and Southern Cape. After a second-round bye, the side shot back into pole position after mowing down Border and Boland and wrapped up the promotion battle with a commanding result over Limpopo in round four.

“Our team spirit and our dominance in the foursomes were key to our success,” said North West manager Leon Bevan on day four.

Despite having won the promotion battle, the eight-man side went all-out in the final round and Bevan’s charges validated his statement with a clean sweep in the morning session against Mpumalanga. 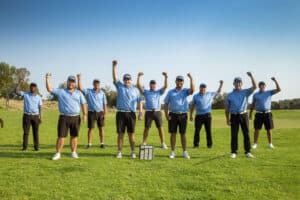 “This feat was down to a really solid performance from the entire team,” said the team captain, Johan Krugel.

“When we faced Southern Cape on day one, we knew we were in for a tough match. Southern Cape was relegated at the last IPT in 2019 and edging them really set the tone for us for the week. After that we just kept on improving and we wanted to finish the tournament on a high note.

“The commitment from the guys showed in our final round performance. We are a team without stars; we are eight guys who played for each other, for our manager and for our union. We are proud to return as the champions.

“Elements has been a fantastic venue and this course is a real gem. The layout is challenging but rewarding and the views are magnificent. Hats off to Gerhard Lombard and the greenkeeping staff here at Elements for their hard work in presenting us with such a pristine course.

“We also want to extend our heartfelt thanks to GolfRSA for running a very well organised tournament and to Limpopo Golf Union and their president Thinus Labuschagne, thank you for your wonderful hospitality.”

Southern Cape finished second, Boland third and the host union, thanks to a huge 10 – 2 win over Northern Cape took fourth place on the final log.