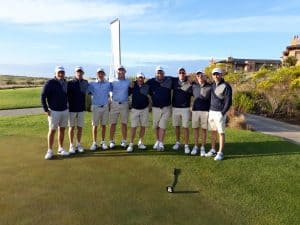 North West threw down the gauntlet with two decisive victories in the opening round of the 58th South African Inter-Provincial Tournament, sponsored by Tempest Car Hire, at Oubaai Golf Club; credit GolfRSA.

GEORGE, 17 September 2018 – Boland better watch out in round two, because North West is out for blood in the B-Section battle for promotion at the 58th South African Inter-Provincial Tournament, sponsored by Tempest Car Hire.

It’s been a long 14 years since North West was relegated at Mowbray Golf Club and after too many close calls, the team is determined to make it happen this year.

North West showed their intent in their opening salvo at Oubaai Golf Club on Monday when the team threw down the gauntlet with a strong start in the foursomes.

Leading Border 3.5 – 2.5 and Mpumalanga 3 – 0, Oliver Goldhill, Rigardt Albertse and Riaan Swart racked up six points with victories against both sides in the singles.

Christiaan Burke, playing at number one, beat Oswin Schlenkrich 3 & 2 and Herman Anderson halved against Chuma Adonis to deliver an 8 – 4 result against Border. Alex Pieterse beat Christo Peens to guarantee a 7 – 5 result against Mpumalanga.

The decisive start moved North West into second spot with four points in the B-Section standings.

With 15 games points in hand, they are just two games points behind log-leaders Western Province, who are equally determined to win this year and reverse last year’s relegation.

The 2012 joint champions launched their campaign at the Ernie Els Signature Course by taking the fight to Boland and Eastern Province in their three-way match.

The team started the singles against Eastern Province with a 4 – 0 lead and kept control as Croy, Johnston, Simpson, Filippi and Germishuys reeled in points to deliver a 9 – 3 win.

Boland banked two points with a 7.5 – 4.5 victory over Eastern Province and Mpumalanga exacted their revenge by beating Border 8.5 – 3.5.