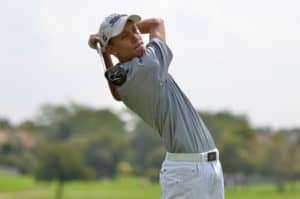 16 May 2018 – North West topped the A-Section log and Northern Cape edged out Boland for lead in the battle for promotion after second round action wrapped up in the SA Country Districts Inter-Provincial at Potchefstroom Country Club on Tuesday.

North West defeated Mpumalanga 7 – 5 and overtook KwaZulu-Natal for the number one spot in the standings after the coastal side drew against Limpopo.

The host union made a decisive start with a 3 – 1 lead in the Foursomes, but the team had to pull out all the stops to stave off a spirited challenge from Mpumalanga once the Singles got underway.

Herman Anderson took out Gary Daniel 4 & 2 and Oliver Goldhill won 3 & 2 against Eddie Wilken to push North West’s tally to 5 points. Eddie Daniel made a strong comeback for Mpumalanga when he beat Ray Janse van Rensburg 2 & 1 and victories from Ryk Lacock and JPF du Toit reduced the gap to just 1 point.

West was back in the driver’s seat at 6 – 4 after Johan Krugel knocked out Daniel Clifford 2 & 1.

Christo Harms halved against Rikus Nel and Albert Britz also squared his game against Ian Jacobs for the vital point that swung the match in North West’s favour.

KwaZulu-Natal won two games and halved another in the Foursomes to lead Limpopo, but couldn’t keep the momentum going in the Singles.

Jannie Bronkhorst, playing at number one for Limpopo, beat Jens Hillerman 3 & 2 and Nico Koster squared the match when he halved against Christopher Thorpe from KwaZulu-Natal.

The coastal side has a third round bye, so North West will be looking to solidify their lead with another decisive victory in today’s third round against Limpopo.

Northern Cape mowed down Border 9.5 – 2.5 to move into the number one spot on the grid, but just one games point separates the log leaders from Boland, who has 4 points and 17.5 games points after a 6.5 – 5.5 result against Southern Cape.

The Northern Cape side, who beat Eastern Province 9 – 3 in the first round, were just as dominant in the match against Border.

The match between Boland and Southern Cape was a different kettle of fish.

Southern Cape’s bottom order – Aiden Boon, Alex van Wyk and NJ Botha – rallied with three wins to reduce the deficit to a lone point and Lukas Steyn squared the match at 5-all when he defeated Lauritz Loubser 2 & 1.

Ryk van Schoor defeated Mthobeli Jacobs at the closing hole to put Boland ahead on 6 points, and Anton Pieters halved the final game against Marlo Pienaar in pars at 18 to secure the win.

Southern Cape need to get their campaign back on track, but it certainly won’t be an easy day at the office when they face the log leaders on Wednesday. Border go up against Eastern Province and Boland has a third round bye.

View the scores and logs under LIVE SCORING on www.golfrsa.com