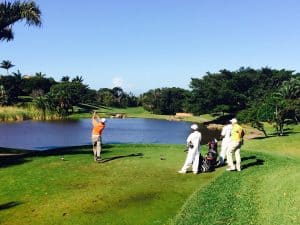 North West and Northern Cape wasted no time getting their noses in front when the rain-interrupted South African Country Districts finally got underway at San Lameer Country Club on Wednesday.

The heavy and incessant deluge that lasted through the weekend and Monday rendered the magnificent layout at San Lameer Estate completely unplayable. Organisers were forced to cancel the first two rounds of the national team championship that was scheduled to start on Monday, 15 May and to make up for lost time, two rounds of singles only were scheduled for Wednesday and Thursday, with the foursomes halved.

After two days of twiddling their thumbs in the clubhouse, players were itching to get started when play got underway on Wednesday morning.

North West started their title bid in the A-Section by defeating Free State 6.5 – 5.5 in the morning session and mowing down KwaZulu-Natal 7.5 – 4.5 in the afternoon session to rocket to the top of the A-Section log on four points.

Mpumalanga is close on their heels after edging out Boland 6.5 – 5.5 in the morning and drawing 6-all against Free State in the afternoon session.

North West has a bye in the morning, so Mpumalanga will target a positive result against KwaZulu-Natal, while Free State tackle Boland. North West will be back in action in the afternoon session against Boland and KwaZulu-Natal takes on Free State.

In the B-Section, Northern Cape drew 6-all against Southern Cape but scored an impressive 8 – 4 victory against Eastern Province to top the pile with three points.

However, Eastern Province managed to bank two points when they downed Border 7 – 5 in the first round to secure second place in the log.