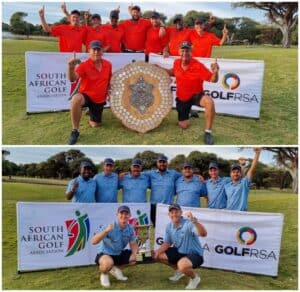 16 May 2022 – North West edged Northern Cape for glory in the 2022 South African Country Districts Inter-Provincial, while Free State came out tops in the promotion battle at Sishen Golf Club this May.

Hosts Northern Cape had positioned themselves at the top of the log with 6 points, and 29 games points over the first four rounds, but a final round bye meant the host union had await the outcome of the match between North West and Southern Cape.

“We were second on the log, trailing by 2 points and 6.5 games points and we knew going into the final round that it was do or die,” said North West captain Johan Krugel. “We not only had to win the final match, but we needed to beat Southern Cape comprehensively to overcome the game points deficit.”

The North West team won the Foursomes 3 – 1 to lay a solid foundation for the afternoon session and racked up 6 Singles wins for the title.

“It was a standout effort by the team,” Krugel said. “There was enormous pressure on us going into the final round, but the boys rose to the occasion. They really stood up to be counted and we managed to edge Northern Cape by 2.5 games points.”

“This was my third term as the team’s captain at the SA Country Districts, and all of them were incredible, but this win was made extra special as my son, Jonathan, was also selected and played outstanding golf in his first IPT. Proud Captain.  Proud Father.”

Manager Hendrik Stapelberg, on his second tour of duty, was also beaming with pride when the team took receipt of the trophy at prize giving.

“We made a great start in the Foursomes, but the Singles was tense. Hats off to Southern Cape for an amazing final match. They really stepped it up and made us work for the win,” Stapelberg said.

“We knew going in that we needed 6.5 to draw with Northern Cape, but the boys put up a huge fight to secure the title. Bernard won 6 & 5, Jonathan 5 & 4 and Thapelo 4 & 3 and that got us the 6 points for the win, but the rest of the games were really tight. Two games went the distance, but when Riaan, playing at No 8, birdied 17 to beat Hans-Jurie Human 2 & 1 we knew we had it.

“Every player on the team took responsibility and contributed to the victory, and I am incredibly proud of them for the way they committed in every match to bring the victory home.

“On behalf of all the teams and players, a very big thank you to Northern Cape and Sishen Golf Club for rolling out the red carpet and for hosting an incredibly memorable tournament. And our thanks to Greg de Doncker from GolfRSA for all his hard work in ensuring that everything ran smoothly.”

Free State and Eastern Province faced each other for the coveted promotion.

“We both had won three matches, so we were tied on 6 points, but we had a slight advantage with 26.5 games points to EP’s 25.5. We knew that 1 games points could make all the difference, as we only needed to draw the match to win,” explained Free State manager Butch Lombard.

“After we drew the Foursomes, the guys were really fired up. They were determined to win the match outright and hats off to our bottom order. They played exceptional golf to take the pressure off the top order and got the job done.”

Letsoso Letsai and Heindrich Erasmus, playing at No 8 and No 7, broke the stalemate, winning 3 & 2 and 3 & 1 respectively.

“The team had been impressive throughout the week in the Singles, and they produced the goods once again on the final day. It was very tense over the front nine, but from the 13th hole they started reeling in the wins. We racked up 24 wins out of 32 in the Singles for the week and I want to congratulate them on this outstanding achievement,” said Lombard.

“We started the drive to Sishen with an incredibly positive spirit and the boys carried that positivity to every match they played. I want to acknowledge Bernard, who captained the side for the first time and really led by example, but there were no heroes on this team – just eight guys who played hard for each other and for their union and they all shared in the glory.

I am incredibly proud of the team. Their conduct on and off the course was exemplary and they are wonderful ambassadors for Free State.”

The outstanding performance from North West over the five rounds earned the team five spots in the top four of the MVP List.

In the B-Section, the top honours with 7 points each belonged to Malan Potgieter and Tiaan Tibshraeny from Eastern Province, while team-mate Johndre Ludick tied for third on 6.5 points with Free State’s Eugene du Plessis.