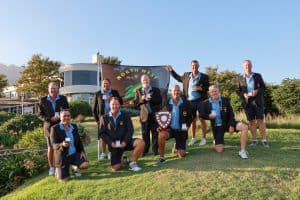 22 April 2021 – North West turned the tables on Ekurhuleni to clinch the promotion battle while Boland celebrated an uncontested victory in the Super Senior Division in the 2021 SA Senior B-Division Inter-Provincial at Erinvale Golf Club on Friday.

North West proved once again proved that the die isn’t cast until the final putt drops when the side overhauled log-leaders Ekurhuleni to capture the Senior title in style. The 2013 champions not only routed Ekurhuleni 6 – 2, but handed Mpumalanga a drubbing by the same margin to regain their A-Division status.

Johan Coetzer (74) and Roy van Blerk (76) set the winning tone for North West and Grant Matthews (75) kept their tally climbing with successful campaigns against both opponents.

Dawie Blaauw (73) beat Jan Jacobs from Mpumalanga by two shots and halved his game against Ekurhuleni’s Robbie Massiceti, while Christo Reyneke secured another half point when he drew against Hendrik Boshoff from Ekurhuleni.

Reyneke was beaten by Mpumalanga’s Kobus Clarence and Fanie Bester lost both games, but the rest of the challenges all went the way of the champions when Grant Matthews carded 76, Johan Krugel produced a 69 and Doug McCabe signed off with a round of 70.

Their winning tally of 7 points and 21.5 games points underlined a stunning outcome for North West, considering that the side had headed into the final round trailing Ekurhuleni by 1 point. The Roses drew against Mpumalanga to finish second, with 5 points.

“I guess I can safely say that we are back with a bang,” said elated team manager Pierre Lotter.

“We were gutted when we were relegated at Wingate Park Country Club in 2019 and we came to Somerset West with only one goal in mind – to get our A-Division status back. This team proved they were up for the task and more. Thank you for a fantastic week boys, you are a great bunch of guys who fought for each other and for this victory. Well done.

“A big thank you to Julian Shaw and all staff at Erinvale. The course was absolutely wonderful and very prepared for us and the club house staff made the week extremely special. The boys are still raving about the food.

“We would also like to thank Bruce Younge and Greg de Doncker from GolfRSA, the South African Golf Association Executive and Western Province Golf Union for all their efforts and the professionalism with which they hosted this national tournament.” 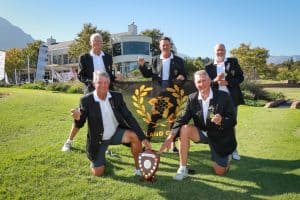 In the 2019 event at Wingate Park Country Club, Boland was sent down to the B-Division without scoring a single point. The fact that George Bezuidenhout, Peter van Coller, Tony Bailey and Dewald Botha celebrated an undefeated week was a measure of their unequivocal resolve to get the union back into the A-Division.

In a commanding performance, the quartet defeated Free State 4 – 0 on day 1 and Northern Cape 3 – 1 on day 2. The third day saw the side score a 3 – 1 victory over Ekurhuleni.

On the final day, Boland swept to a 3 – 1 win against North West and beat Eastern Province 2.5 – 1.5 to cement their promotion with a 2 point victory over Ekurhuleni.

“I was a member of the side that got relegated at Wingate and I can tell you that it was the worst feeling in the world. When Boland Golf Union offered me the manager’s position, I jumped at the chance to be a part of our comeback,” said manager Stefan Kruger.

“It was an absolute honour and a privilege to manage these four gentlemen who performed so unbelievably well and brought pride back to Boland. It was an incredible performance from the entire team, but I am sure the guys will agree that Tony deserves a special mention. He was an absolute standout captain who kept all us inspired throughout the week.”