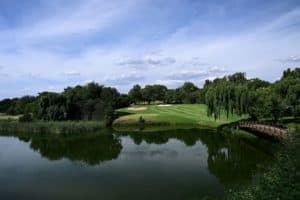 Every Randpark member knows there are eight par-fives – four on each of the Firethorn and Bushwillow courses – but for the professionals playing in this week’s South African Open hosted by the City of Joburg there are effectively no par-fives.

“Well, it’s just that most of the guys can hit every par-five in two so we really are treating them like par-4s,” explains big-hitting Jacques Kruyswijk.

One of the South Africans who competes on the European Tour, Kruyswijk is no exception to this rule. In a practice round on Bushwillow’s par-5 17th – where a stretch of dangerous drink fronts the green –  he bombed a 323-metre drive down the middle before conferring with his Scottish caddie Tim Poyser. “What do you think we need here?” he asked the bag man.

“It’s 172 (metres) to the pin and a smooth seven-iron should do the trick,” came the reply. Kruyswijk agreed and easily hit the green in two on a hole that gives many of the Randpark members palpitations as they line up what could be a third or even a fourth shot over the broad expanse of water to the narrow green.

It certainly seems so for these guys. Last year in the first round of the SA Open here Dean Burmester hit the par-5 first hole on Bushwillow with a drive and a wedge en route to an eagle-three. In the final round on Firethorn, eventual champion Louis Oosthuizen also hit drive-wedge at the par-5 15th also on his way to a three.

And the pros almost reduce Bushwillow’s 310m par-4 fifth hole to a par-3 if they take out driver there – even a three-wood. There is risk involved with a stream on the right but most can reach the green in one.

So will Brandon Stone be going for broke there this week? “Of course I will. Do I look like a lay-up kind of guy?!”