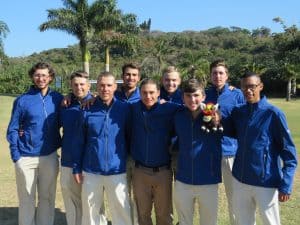 The good news for Nelson Mandela University was both their A and B teams made the A-Section for the match stage in the 2018 USSA Golf Championship. The bad news is that the two teams will face off in the first round at Port Shepstone Country Club on Wednesday; credit GolfRSA.

NMU A and the University of Stellenbosch A posted matching totals of 224 to share the first round lead. The two teams carried a one shot lead into the final round of the 36-hole seeding qualifier over defending champions University of Pretoria on Tuesday.

The Bay trio combined for a final round total to beat Maties A by 10 shots on 436.

Van der Merwe led the NMU A-team with an opening four-under-par 68. He carded 70 in the final round to claim the medallist honour in the Individual Competition. The former Western Province number one beat Johannes Vlok from Maties A by five shots and finished six clear of GolfRSA National Squad player Clayton Mansfield from Varsity College A.

Van der Merwe’s team-mates De Beer and Smit did the rest to ensure NMU A finished at the top of the table.

De Beer, who represented South Africa in the FISU World University Golf Championship in the Philippines, shot 71. Smith also posted 71, improving 10 shots on his first round effort. Colin Baldie, the fourth member of the team, returned non-counting rounds of 86 and 77.

With the format switching to match play, at least one team from NMU and the University of Pretoria will advance to the second round.

In an unfortunate stroke of bad luck, NMU B finished eighth overall in the qualifier, which means the 2016 champions will tackle Tristan Naude, Rushane Peters, Keaghan Roberts and Connor Meyer in the first round.

Tuks is in the same boat after their A and B teams respectively finished fourth on 453 and fifth on 459, which means the defending champions and the B-team go head-to-head in the first round decider.

Varsity College A meet University of Cape Town A, who took sixth overall on 461, and Maties A go up against North West A, who sealed seventh on 462 in the qualifier.

Written and released by Lali Stander on behalf of the USSA Championship and GolfRSA.