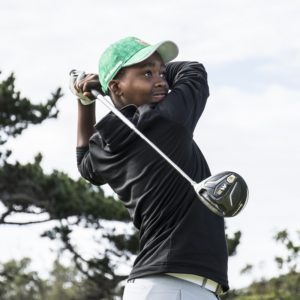 An eagle finish lifted Rorisang Nkosi to joint second in round two of the Gowrie SA U-15 Challenge at Gowrie Farm Golf Estate; credit GolfRSA.

4 April 2018 – Rorisang Nkosi from North West soared into contention on the wings of an eagle finish as second round action in the Gowrie SA Under-15 Challenge wrapped up on Wednesday.

Overnight leader Jaden Deltel carded an even-par 71 to retain the lead on three-under, but fellow Central Gauteng junior Herman du Plessis and Nkosi are within one stroke of the Bryanston junior.

Both players were three off the pace at the start of the second round at Gowrie Farm Golf Estate.

Nkosi has been on the rise since he claimed a top six finish in the Individual Competition of the Nomads SA Under-13 Championship at Port Elizabeth Golf Club last October. Just over two months ago, the 13-year-old rammed burst to a third place finish in the Nomads SA Boys Under-15 Championship when he fired a final round 69 at Kingswood Golf Estate in George.

He dipped below par with a birdie at the second, but lost the advantage with a bogey at seven.

Nkosi reversed another bogey at 10 at the next hole and made six straight pars on the bounce, but two superb shots at the closing hole and a holed eagle putt will see him start the final round in a tie for second at two-under.

The record field of 52 juniors were treated to a talk and a golf exhibition by GolfRSA National Squad member Matt Saulez. The KwaZulu-Natal, who ranks third in the country, represented South Africa with great success on three occasions last year and recently clinched a runner-up finish in the SA Stroke Play Championship.

“I would like to thank Matt for giving up his time and driving out all the way to Gowrie Farm to host the clinic,” said tournament director David Younge. “It was fantastic to have a player of his calibre here, chatting to the future generation and sharing insights about his career, his exercise and practice regime. The kids also enjoyed watching his skills at the driving range, especially when he drove it onto the first green, a distance of some 350-plus metres.

“Just a huge thank you to the greenkeeper, who worked really hard to present us with an immaculate course once again. Conditions were cool and the wind was just over one-club strength. I’m really excited to see the cream rise to the top, with six of the top 12 junior on the Under-15 Junior Ranking in contention.”