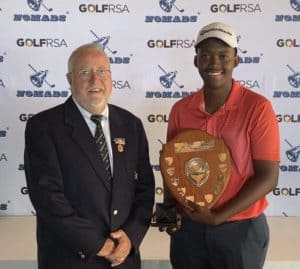 Nkosi set himself a target of securing a first win on the national junior circuit in 2020 and duly delivered in Nelspruit, carding rounds of 72, 74 and 72 to finish the week on two-over-par 218.

“Winning one of the Nomads national tournaments was my top goal this season, and I’m so stoked with this win,” said the 14-year-old North West junior, who rallied after a stumbling start to pull off a one-shot victory.

Two shots behind overnight leader Hannes Strooh at the start of the final round, Nkosi stumbled out of the blocks with three bogeys in a row, however he righted the ship with a birdie on the fourth and made nine pars in a row to stay in touch with the pacesetter from Gauteng.

“I was really calm, even after the bogeys. The birdie on the fourth turned things around and from that point, I felt really in control,” Nkosi said.

“I two-putted the 14th after I pulled my drive for bogey, but I bounced back with a birdie on 15. I hit 3-wood down the right, and wedged over the trees and the water to 15 feet.”

The birdie on 15 moved Nkosi within a shot of Strooh and he drew level with the leader on five-over with a further gain at the par three 17th.

“The 17th was playing 120 metres and I hit a pull gap-wedge to 10 feet,” Nkosi said. “Because the 18th is a tough closing hole, I thought we would have a play-off. I didn’t expect to win outright.

“Hannes split the fairway and I missed the fairway just left. I hit my second on the middle of the green and had about 20 feet to the pin, back left. Hannes missed the green on the right, but he putted it to five feet. I lagged my first putt to three feet and when he missed his par putt, I knew I had a chance.

“I was really nervous standing over that putt. I just thought about all the clutch putts I made to save par earlier in the round, took a couple of deep breaths and boxed it for the win. I can’t even describe how great it felt when the ball drop in the hole.”

Nkosi showed plenty promise in the middle of last season when he finished with joint fifth in the Boys Class B for 13-to-14 year olds in the ATI Ciputra Golfpreneur Junior World 2019 in Indonesia. He also partnered SAGDB stablemate Kieron van Wyk to third overall in the Boys Team Competition.

Back on home soil, the Pecanwood golfer backed up the strong performance in Jakarta with a top five in the Nomads SA Boys Under-17 Championship at St Francis Links and two runner-up finishes on the popular Bridge Fund Managers Junior Series. He also banked 8 valuable points in his second appearance for North West in the SA Junior Inter-Provincial at Oubaai in December.

“Jakarta taught me a lot about the mental side of the game and that’s why I could put the bogey-bogey-bogey start out of my mind,” he said. “I really dug in there in the final round. I made a lot of clutch putts to stay in the fight and kept calm under pressure.

“I think my game has come a long way in the last 12 months and I’m really stoked to start the season on such a high note. My goal is to break into the top 20 on the GolfRSA Junior Rankings and this is a great start. I want to thank my parents, Siswe and Hloni, for their awesome support and the South African Golf Development Board for giving me so many incredible opportunities to improve.”

Tyron Groenveld from Modderfontein Golf Club birdied the closing hole for 73 to tie for second with Serengeti’s Marno Lange (70) and Strooh (75), while Zimbabwean junior Keegan Shutt also carded 73 to finish alone in fifth on 221.

The 2020 Nomads SA Under-15 Championship was opened to female competitors for the first time, and local favourite Lucia Mhlabane walked off with the honours with rounds of 91, 85 and 92.

The Mpumalanga junior is a member of the South African Golf Development program in Malelane, which is funded by the Gaynor Rupert’s Ladies Invitational. She lives on Riverside Farm and benefits from having access to the National Junior Development Centre at Leopard Creek.

Following a top five finish in the B-Division at the 2019 Nomads SA Girls Championship, Mhlabane stepped in as a last-minute replacement for Free State at last year’s South African Women’s Inter-Provincial at Riviera-on-Vaal Golf and Country Club, where she helped the team to a B2 Division win.