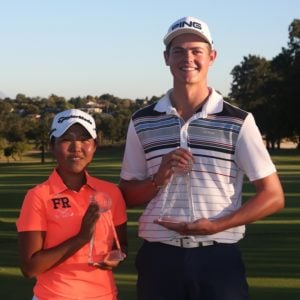 18 December 2017 – GolfRSA juniors Wilco Nienaber and Woo-Ju Son captured a one, two finish for South Africa in the prestigious Greg Norman Academy Junior Invitational in the United States on Sunday.

Nienaber laid down a marker for a Global Junior Golf Tour hat-trick when he opened with a one-under-par 71 on the Norman Course at the Barefoot Resort and Golf in Myrtle Beach. The Bloemfontein junior kept control with a level par 72 in the second round and sealed a five stroke triumph on two-under 214 with a final round 71.

Nienaber, whose average drives hovers around the 315 metre mark, said a good dose of self-belief carried him to the winner’s circle.

“I didn’t have a good week with the putter,” he said. “I drove it well and the irons were accurate, but I couldn’t score on the greens. When I led the first round, I knew I could win. I felt confident and I backed myself.”

The 17-year-old from Grey College has further title aspirations and is targeting a 12th trophy finish in this week’s South Beach International Amateur, which tees off at the Miami Beach Golf Club and Normandy Shores Golf Course on Tuesday.

But he won’t just face some serious challengers from the United States.

Meanwhile Son celebrated her 16th podium finish for 2017 with a runner-up finish in Myrtle Beach.

The GolfRSA Elite Squad player opened with a 75 to grab a share of the three-way tie at the top, and led the field with a second round three-under 69. She battled in the tough conditions in the final round and returned a 78 to finish on six-over 222. Colombian Daniela Gonzalez 71 to win by three shots.

Son has been equally impressive with eight victories this season.

The 16-year-old Country Club Johannesburg junior outclassed the professionals with a top 10 finish in the SA Women’s Open and lifted the Jackie Mercer Trophy as the leading amateur at San Lameer Country Club.

Son will be heading back to the United States in January with number one ranked senior Kajal Mistry to compete in the Annika Invitational at the World Golf Village in St Augustine, Florida.