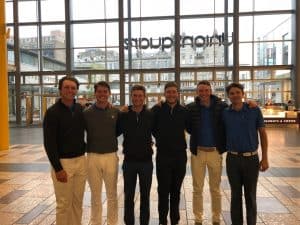 Smiles All Round! The six GolfRSA National Squad players who reached the knockout stages of the 123rd Amateur Championship at Royal Aberdeen in Scotland; credit GolfRSA

20 June 2018 – Bobby Cole is the one and only South African winner in the 123-year history of the Amateur Championship, but South Africa’s leading amateur Wilco Nienaber wrote his own bit of history when he won the stroke play qualifier in Scotland on Tuesday.

The 18-year-old GolfRSA National Squad player became the first South African medallist since qualifying was introduced in 1983 when he beat world number five Victor Hovland from Norway by two strokes in the 123rd edition at Royal Aberdeen.

Nienaber led the 288-strong field with a first round four-under 66 at the Murcar Links and went wire-to-wire with a four-under 67 at Royal Aberdeen to triumph on eight-under 133.

And the Bloemfontein golfer will not be the lone South African to start the Match Play stage at Royal Aberdeen on Wednesday.

A 12-time winner in 2017, Nienaber vaulted to number one after his third place finish in the South African Stroke Play Championship. He bagged two victories at home this season and came agonisingly close to a third international title when he lost in a play-off at the Brabazon Trophy.

The plus-5 handicapper from Free State has been warming up for amateur golf’s showpiece since he teed it up in the Lytham Trophy in early May with fellow team-mates Saulez and Mitchell.

“After Lytham, we joined some more GolfRSA National Squad players, including Therion, at the Irish Amateur,” said Nienaber. “Over the last six weeks, we played a lot of courses and championships in Ireland, England and Scotland. Jovan and Luca joined us at the St Andrews Links Trophy, which was our final preparation. There have been some tough weeks, but it has been a fantastic learning curve.

“We have links courses back home, but it’s not links golf like this. I’ve learned it’s a different game over here. Back home, if it’s 180 meters, you fly it straight there. Here, if it’s 180 metres, you to hit it 20 metres shorter and let it bounce in.”

His growing understanding of links golf was reflected in his performance this week.

“When I heard that the GolfRSA National Squad was going to play The Amateur Championship this year, I was really excited,” said Nienaber. “To finish at the top in the qualifying is great.

“I made good decisions from the tee, stuck to my game plan and hit the greens on both days. I hit the ball really nicely. I wasn’t really in trouble off the tee and didn’t miss a lot of greens on both days. When I missed greens, I got up and down 90 percent of the time.

“I kept the momentum going and didn’t really make a lot of bogeys. The match play stage is a different game, but winning this or finishing at the top makes me feel like I can beat the other guys, which is really nice. Bobby Cole was 18 when he won in 1966, so hopefully it’s a lucky number.”

Saulez from Durban Country Club followed a 72 at Murcar with a flawless 67 at Royal Aberdeen to snag fourth on two-under, while Kloof’s Mitchell posted rounds of 71 at both courses to finish joint ninth on one-over.

Next best was Rebula from George Golf Club, who birdied the fifth and eagled the sixth on his way to an even-par 71 and joint 18th overall on three-over.

Nel, from Bloemfontein Golf Club, and Milnerton’s Filippi tied for 25th on four-over. Nel carded 74 at Murcar and enjoyed a flawless back nine at Royal Aberdeen en route to a 71, while Filippi rallied after an opening 77 with a 68 that featured four birdies and a lone drop.