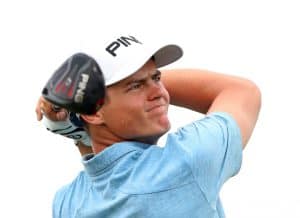 29 July 2020 – As the European Tour emerges from its Covid-19-enforced hibernation, former South African No 1-ranked amateur Wilco Nienaber has kept himself occupied with some eye-catching performances on the UK’s mini golf tours.

<UPDATE>
Nienaber seized his chance by claiming a fourth-place finish in the recent English Championship on the European Tour. The 20-year-old fired rounds of 68, 65, 67 and 66 to claim the biggest cheque of his career, worth €46,125 (R957 747). More importantly, the result boosted Nienaber’s position on the European Tour’s Race to Dubai rankings to 92nd and the top-five finish helped him qualify for the following week’s event, the Celtic Classic at Celtic Manor Resort in Wales. He has also moved up the world ranking to a career high of 379th, having started the year 1665th.

Nienaber received a late call up to the tournament when American John Catlin was forced to withdraw after breaking the European Tour bubble when he and his caddie went out for a meal in the days leading up to the event.

During two months of enforced lockdown at his parents’ home in Bloemfontein, 20-year-old Nienaber feared that the Corona Virus had brought a premature end to what has been a promising rookie season. Despite only a handful of starts, he had finished the season ranked 19th on the Sunshine Tour Order of Merit and is currently ranked seventh on the European Challenge Tour.

In order to prepare for his next European Tour start, the former GolfRSA National Squad member opted to base himself in Manchester, England and, after waiting out a mandatory isolation period, has kept himself busy by tearing up the courses on the mini tours of Northern England. Results of 1st, 2nd, 3rd and 1st in his first four events indicate that there is not much rust on the 20-year-old’s set of PINGs.

“My current ranking sees me on the reserve list for most of the European Tour events,” he explains. “So I need to do a lot of waiting and hoping to get in. Thankfully I’m into a great routine where I can practise every day, spend time at the gym and eat healthily.”

Nienaber has taken up residence with his manager Mark Bell and this has given him a solid home base as he waits for any last-minute calls to tee it up on the UK Swing of the European Tour.

“I’ve got my own transport now so I can come and go as I please and I think it’s been good for my game,” he says. “I’m doing what I would be at home, except that I get to play in some of the mini-tour events against some good players.”

Nienaber has certainly caught the eye in his first four 18-hole events on the mini tours, posting scores of 64, 65, 67 and 65, with two wins and a worst finish of third.

“In some ways it feels like I’m getting the hang of the game again after having spent two months hitting balls in my garage,” he laughs. “Not being able to play tournament golf has obviously been frustrating, but it’s important to keep things in perspective because there are so many people around the world who have been ill or lost their jobs due to this virus.

“I’m grateful that I have a steady home base here and the opportunity to play in the mini-tour events, because I’ve played really well and it has helped keep me game fit. I know that when I get the chance to tee it up on the main tour I’m going to really enjoy it and hopefully take my chance.”

The mini tours, such as the 1836 Tour and the 2020 Pro Tour, may offer small purses but are essentially a one-round shootout featuring some really good players.

“They are a lot of fun,” Nienaber explains. “It’s just pitch up and play and shoot as many birdies as you can.

“I’m playing the courses blind, with just a yardage book to help me, so I feel like I could definitely go even lower. In my second event I lost by two strokes to David Horsey, but my round included a triple bogey on the one hole where the yardages in the book didn’t quite match with the course and I ended up hitting my tee shot through the fairway and into some trouble.”

The fields are far from weak and are made up mostly of locally-based European Tour players and promising young professionals and amateurs from the surrounding areas.

“For me, it’s definitely better than spending my days practising on the range,” he explains. “It has helped build my confidence and when I do get back on tour I won’t be wondering where my game is at.”

For Nienaber, the waiting game is proving rather fruitful and one suspects his time on the big stage is not too far off.