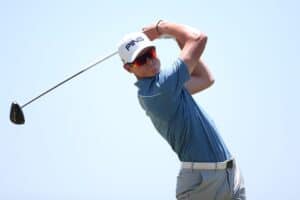 Well before thunder and lightning rolled through the Lowcountry and suspended play for a bit late in Friday’s second round of the Palmetto Championship at Congaree, Wilco Nienaber was delivering his own violent turbulence.

The 21-year-old GolfRSA National Squad graduate has turned plenty of heads this week in his PGA Tour debut with eye-shocking power. Bubba Long? He’s got that covered. And watch out, Bryson DeChambeau, the kid could supplant you as the longest in the game.

At 6-2 and just 175 pounds, Nienaber still cranks up bombs with an effortless swing. Through two rounds, he’s hit 25 tee shots longer than 300 yards, including a 379-yard missile on his last hole in the second round.

He leads the field in Strokes Gained: Off the Tee, picking up nearly 2.5 shots per round on his peers. He leads in driving distance measured on all tee shots at 336.1 yards per pop, and that’s diluted some by the shortish 18th hole where nearly everyone is hitting iron off the tee.

His distance numbers are not a fluke this week; in the second round of the 2020 Joburg Open in South Africa, he hit a drive 439 yards, the longest blow on the European Tour that season.

Nienaber, ranked 143rd in the world, has won on the Sunshine Tour and the European Tour’s Challenge Tour. He earned a spot in next week’s U.S. Open by leading the 2021 Sunshine Tour’s Order of Merit. You want Brooks and Bryson paired up? Nienaber and DeChambeau would be quite a show to watch at Torrey Pines, too.

With a pair of 3-under-par 68s in the Palmetto Championship, he is five shots behind leader Chesson Hadley and in position to become the first player to win in his PGA Tour debut since Jim Benepe did so in the 1988 Western Open.

“When I got here at registration, I had no idea what to do,” he said. “So that’s a little bit different because I’m not sure where to go and what to do.

“I’m really pleased with what I did the last two days. Growing up watching the PGA Tour is where I want to be, and it’s really nice to start off like I did.