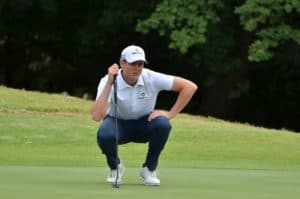 Nienaber went head-to-head for the title in a sudden-death play-off with Nick Poppleton at Frilford Heath Golf Club last year, but the Englishman denied the South African a first international victory when he chipped in for birdie at the second extra hole.

Although the Free State golfer is still a long way off, he moved in the right direction with a level-par 71 in Friday’s second round at the Alwoodley Golf Club.

Nienaber finished in the six-man bus on two-over with Filippi, who returned a round of 72 for a second successive day, but the six-pack on 144 will have a lot of ground to make up on moving day to catch up to leader Ben Schmidt on nine-under.

The Englishman surged three shots clear with rounds of 69 and 64.

Nienaber overcame a bogey start with back-to-back birdies and sandwiched a third birdie between bogeys at nine and 11. The Bloemfontein golfer played the last seven holes of the tough closing stretch in straight pars.

“It was really great to see some spectators out here today, and I’m enjoying it a lot,” Nienaber said.

“We managed to stay dry today, but the wind made club selection and positioning tough. The wind was swirling a lot and that made it difficult to decide what to hit and where to hit.

“I went with driver at the first instead of an iron as planned, and it wasn’t a bad play, but I hit a poor second shot. I was in the right rough with the pin at the back and it was all down-wind.  The pitch came out too hot and went into the bunker behind the green.

“I hit a good bunker shot that rolled three metres past and I lipped out for par. I hit 2-iron to three metres at the second and made return for birdie and two-putted the third after a good drive and a sand-wedge in.

“From the 11th I played really solid golf and gave myself a few birdie chances, but they just burned the edges and didn’t drop. I’m pleased that I managed my game better and made a positive move. There’s still two rounds to go, so if I can limit the mistakes, I can keep climbing the leaderboard.”

Filippi made a solid start and was two-under after birdies at the second and third holes, but he gave one shot back at the par four sixth. The Western Province golfer dipped three under par with birdies at nine and 10, but slipped to two-over with bogeys at 11, 15, 16 and 18.

Meanwhile De Beer from Eastern Province followed an opening 75 with an even-par 71 to make the weekend on the number. The Port Elizabeth golfer was two-under through 13 holes, but dropped two shots at the par three 13th.

Nienaber and Filippi’s fellow GolfRSA National Squad team-mates Jayden Schaper and Therion Nel both missed the cut to 60 and ties, set at four-over.

A further seven young South African talents will start their GolfRSA National Squad tour in Ireland on Saturday, where they hope to emulate compatriot Christo Lamprecht, who became the youngest winner and first foreign champion in the 76 year history of the highly-rated East of Ireland Amateur Open Championship last year.