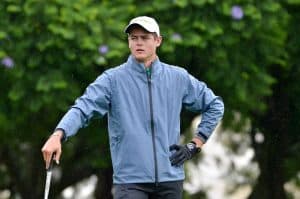 olfRSA National Squad player Wilco Nienaber is one off the pace after the opening round of the 2018 Brabazon Trophy at Frilford Heath in England; credit Rogan Ward.

1 June 2018 – South African Wilco Nienaber shared the lead after a truncated first day of the Brabazon Trophy and the Bloemfontein golfer is still very much in contention after the conclusion of round one on Friday.

The first round at Frilford Heath in Oxfordshire had to be suspended after torrential rain rendered the Red Course unplayable. Just under half the field, including fellow GolfRSA National Squad player Malcolm Mitchell, had to return on Friday morning to complete the round.

Nienaber made the most of an early start and fired his way into the early lead with Englishman Jack Cope and Frederic Lacroix from France on five-under-par 67.

Frenchman Jeong Weon Ko and English duo Jay Beisser and Nick Poppleton took route 66 to the top of the pile, leaving South Africa’s number one ranked amateur just one off the pace.

Nienaber lost the advantage of a birdie at the second with a bogey at the third. The 18-year-old Bloemfontein golfer turned one-under after picking up a shot at the par five sixth and racked up four birdies over the last six holes.

“The putts were ringing the holes on the front nine, but I stayed patient and the flat stick warmed up on the back nine,” said Nienaber. “I holed a 35-foot putt at 13 for birdie and boxed a five-footer at 15 to go three-under. I had a tap-in birdie at 16 and at the final hole, the birdie putt was about three foot.

“I had a very solid round tee to green and I didn’t make many mistakes. My worst hole all day was a soft bogey at the third after I drove it in the bunker in the middle of the fairway. The rain came down incredibly hard, but we walked the back nine with Malcolm on Friday and the course is still in great condition, despite all the rain. I’m looking forward to getting the second round underway.”

Countrymen Matt Saulez and Chris Woollam carded rounds of 74 on Thursday, while Mitchell went around the 7 045-yard (6 442 metre) layout in 73 strokes on Friday.

The 36-hole cut was adjusted to the top 45 and ties to allow enough time for both the third and final rounds to be contested on Sunday, which means the KwaZulu-Natal trio will have to go low in Saturday’s second round.

Mitchell is joint 60th, with Saulez and Woollam tied for 79th.

Saulez made a solid start and was two-under after a tap-in birdie at from 118 yards on the sixth and a two-putt birdie on seven, but he devaluated his effort with bogeys at nine and 10.

“I had a soft bogey at 10 and two more soft drops at 13 and 15, but I felt like I played a lot better than my score suggests,” said Saulez. “I put some productive time in on the range and around the chipping and putting green on Friday, and I’m looking forward to putting together a low one on the board in round two to get back into the tournament.”

Mitchell overturned a bogey start with a birdie at the second and picked up another birdie at the fourth. He had just teed off at the fifth when play was suspended.

“The fairways, rough and greens were wet and the bunkers were very soft and some still had some casual water, which actually cost Malcolm a shot,” said team manager David Young.

“He bogeyed five and seven, but offset further bogeys at 12 and 16 with birdies at 11 and 17. The putter was a little cold. He hit some really good putts, but quite a few birdie putts shaved the hole.

“After the round, he spent more than an hour on the putting green and then he joined Wilco and Matt with a good session on the range and chipping green, as well. All three players are feeling very positive and keen to have a strong showing in the second round.”