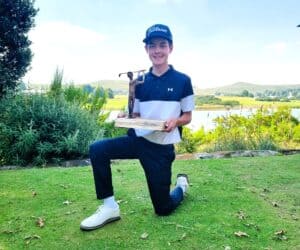 31 March 2022 – GolfRSA’s top-ranked Bryan Newman lived up to his billing as pre-tournament favourite when he added the Nomads Gowrie Farm SA Under-15 Challenge title to his blossoming golfing CV.

Four months ago, the Pecanwood junior capped a fantastic 2021 season and celebrated his 14th birthday with a national breakthrough when he raced to a six-shot victory in the Joburg Under-15 Junior Open.

And just as he did at Glenvista Country Club in December, Newman went wire-to-wire at Gowrie Farm Golf Club with rounds of 73, 67 and 70 to win by seven strokes.

Craig got his title defence off to a disastrous start, shooting a round of 81 before steadying the ship with a second-round 71. He really turned on the heat with a superb final round of 65, but ultimately, it was not enough to catch Newman.

The champion began the final round with a seven-shot cushion after a second round 67 that included eight birdies, two bogeys and a double on the tricky par-five 18th.

“Today was all about keeping calm and focused and trusting that the golf would come,” said Newman. “I have been playing really well lately and with perfect conditions here at Gowrie, I knew that I could make birdies if I stayed patient.”

The North West teenager mixed five birdies with two bogeys and a double, eventually knocking in a short par putt for a round of 70 that sealed his second national title in the last four months. 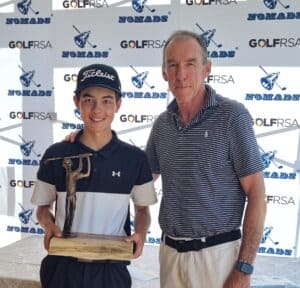 “I think I speak on behalf of all the players in saying a huge thank you to Nomads and GolfRSA for putting on these great junior events,” he said. “We love playing the Nomads events and we appreciate the opportunities to play great courses like Gowrie.”

Craig was proud of his performance and the way he bounced back after the disappointing first round.

“I really struggled in the first round,” he explained, “but my dad encouraged me to keep on trying and I improved by ten shots in the second round. Today, with the wind down, I was able to give myself a lot of birdie chances and I boxed a lot of them.”