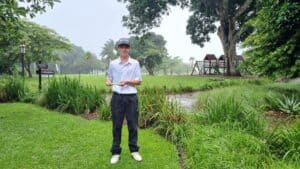 10 January 2023 – North West junior Bryan Newman continued to impress as he racked up his fourth national title in the weather-reduced Nomads National Order of Merit Coastal at Selborne Golf Club this January.

Remarkably, it was yet another wire-to-wire performance that landed Newman in the winner’s circle in KwaZulu-Natal.

The Pecanwood golfer capped a breakout season in 2021 when he raced to a six-shot victory for his first national victory in the Joburg Under-15 Junior Open at Eagle Canyon Country Club. Just four months later, he went wire-to-wire again to lift the Nomads Gowrie Farm SA Under-15 Challenge title at Gowrie Farm Golf Club by seven strokes.

A successful title defence in the Joburg Under-15 Junior Open at the end of last year, where he once again led from start to finish, saw him celebrate a runaway nine-stroke victory with rounds of 69 and 68 at Kyalami Country Club, and he finished the season in the No 1 spot on the GolfRSA U-15 Rankings.

The North West junior was nearly faultless in his first start of the season, carding six birdies for an opening five-under 67 in the morning at Selborne for a share of the first-round lead with Roelof Craig, who plays out of Silver Lakes.

The heavens opened and, starting the second round in sweeping rain, Newman returned a 73 that earned him pole position.

He lost the benefit of a birdie on the fifth to a bogey on the seventh, but negated another dropped shot on the 10th with a second gain on the 14th. A closing bogey for a four-under total saw head into the final round with a slender one-shot lead over Woodhill’s Fabrizio de Abreu.

Unfortunately, the unrelenting rain continued throughout the night and, despite the best efforts from the green staff at Selborne, the course became unplayable as the downpour refused to let up.

GolfRSA Tournament Director David Younge was forced to stop play shortly after the start of the final round and declare a 36-hole result.

Having claimed is fourth national title without even hitting a shot, Newman accepted the trophy with mixed feelings.

“It’s not the way I would have liked to win, but I have to accept the outcome,” he said. “We knew at the start of the round that conditions were going to be challenging because had taken a huge bearing, and I think the weather left Uncle Dave no other choice than to stop play,” said the Grade 10 Steyn City High School learner.

“In the first round, everything went right, especially the putting. I was draining everything I wanted to make. That always boosts the confidence and the rest of your game. It was a little tougher in the rain in the afternoon, but my game was solid. I wouldn’t have minded to get some more experience playing in the rain, but I am happy that I managed my game really well in the rain in the first round, so that’s something.”

Courtesy of the win, Newman rose from 26th to 7th in the U-19 rankings, and he is looking forward to continued improvement this season.

“It’s a big step up from the U-15 circuit, but I am looking forward to it and I’m ready to embrace the challenge,” he said.