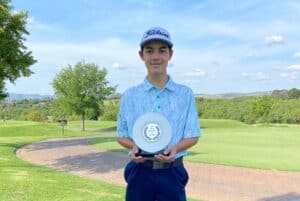 22 December 2021 – Bryan Newman confirmed his status as the No 1-ranked U-15 golfer in the country when he completed a six-shot victory in the Joburg Under-15 Junior at Glenvista Country Club in December.

Just a few days ahead of his 14th birthday, the Pecanwood junior fired rounds of 70 and 72 to claim his maiden national title, ahead of Roelof Craig in second.

“It feels amazing to win here today,” said Newman. “Glenvista is an amazing golf course, and the conditions were great, with the greens nice and quick. It feels like an early birthday gift and I’m so happy to have completed the win.”

After a tie for sixth in the Friends of Engelberg hosted by Anna at Devonvale in August, Newman competed against the top ranked under-19 juniors in the Nomads North & South Championship and the Dimension Data U-19 Open at St Francis Links and he put all the experience gained into action at Glenvista.

Newman finished the Joburg Under-15 Junior at two-under-par – the only player in the field to complete the event in red numbers.

Thanks to a stunning finish to his first round, where he birdied four of the last five holes to open, the teenager slept on a healthy three-shot lead over the field and, on day two, Newman played steady golf, protecting his lead as he matched two bogeys with two birdies in tricky conditions.

“I knew I was going to have to shoot a solid round to keep my lead,” he explained.

“There were a lot of good quality players in the field, so I had to make sure I limited my mistakes. This win really gives me a confidence boost going into 2022. I’ve had a few close calls before, but this is my first big win, and I couldn’t be more excited for next season.”