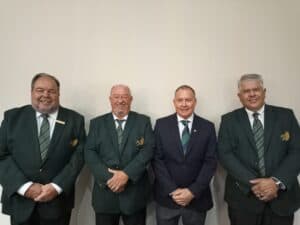 Smith took the reins as Acting President during August last year after the unexpected passing of former President Martin Saaiman, and his move into the role will be seamless.

The trio will serve as the SAGA Office Bearers for the next 24 months.

In terms of his tenure as President, Smith intends to maintain the high standard achieved by the SAGA, GolfRSA and Womens Golf South Africa.

“I have been honoured to serve amateur golf for the last 15 years, and I look forward to the opportunity to build on the great work of my predecessors at the SAGA and GolfRSA,” said Smith, who was involved in administration at Western Province Golf since 2007 until he was elected Junior Vice President in 2019.

“It has been a privilege to be party to the SAGA’s transition towards a professional structure in the past three years, and the successes we have celebrated. Deon and I have worked extremely well in tandem for the last nine months, and Peet will be a great addition to the team. As the former North West Golf Union President, and in his role on the SAGA Executive, Peet has proven himself as an experienced administrator with an unwavering passion for the game.

“Our priority will be to maintain the high standard we have achieved, and in collaboration with GolfRSA, we will continue to find new opportunities for golf. Furthermore, I want to continue the good communication between ourselves and Womens Golf South Africa (WGSA) as we work towards the furtherance of golf in South Africa.”

The SAGA and WGSA are stakeholders of GolfRSA and is responsible for administering, operating and providing services to amateur golf in South Africa.

GolfRSA CEO Grant Hepburn said: “Henk had to step into the role of Acting President just a few months after his election to Senior Vice President, and he did so unwaveringly. He guided the organisation through uncertain times, and his selection to President is a confirmation of the confidence placed in him. We wish him great success for his term.

“We also applaud Deon’s appointment as Senior Vice and we welcome Peet to the fold. The GolfRSA Board of Directors and I look forward to continuing the strong relationship with the SAGA office bearers going forward.”

Former Eastern Province Golf Union President Nel is excited to continue to build on the work done to further the game since his election to Junior Vice President in 2021.

“It was a privilege to work with Martin for a few short months and working closely with Henk and GolfRSA over the last ninth months has been very rewarding,” Nel said. “I look forward to the next two years and grateful that the SAGA Executive have placed their trust in Henk, Peet and myself. We have set ourselves a few targets and we are committed to achieving these goals.”

Van Schalkwyk represented North West from 1979 to 1998 and in 2000, he took on the manager’s mantle of the North West Premier Inter-Provincial Team. The 60-year-old area manager for a mining supply company began his administrative career with the union in 1995. After serving as Vice President from 2000 to 2006, he was elected President in 2007. He has also served on the SAGA Election Committee since 2020.

“It’s a great honour for me to join the SAGA Office Bearers and I look forward to working with Henk and Deon,” Van Schalkwyk said. “In the last few years, the SAGA has made exciting strides in golf development and the sustainability of the sport, and we are determined to maintain these high standards. On a personal level, junior golf is a particular passion of mine, and I am excited to have the opportunity to explore ways in which we can bring more juniors to the game at national level.”