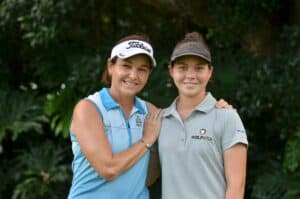 10 February 2022 – The final round of the 120th South African Amateur Championships on Friday will come down to a battle of the ‘oldies’, two best friends and a historic first mother-and-daughter clash at Royal Johannesburg and Kensington Golf Club.

In the 36-hole finals that will determine the winners of the country’s most prestigious amateur titles, a pair of 23-year-olds in Scotland’s Rory Franssen and GolfRSA National Squad member Kyle de Beer will face off for the men’s trophy, while 2020 runner up Kyra van Kan will be looking to go one better this year when she comes up against surprise package Marine Legentil in the women’s final.

While the last five winners of the Men’s SA Amateur have been in their teens, the experience of the two finalists came to the fore.

They successfully negotiated an extremely taxing week on the two very long East and West golf courses, not only warding off the challenges of some very strong competition, but also enduring numerous weather delays due to the regular Highveld afternoon storms that deposited more than 100m of rain in the last six days.

The South African Swing series of events has proven the ideal warm up for the Scottish Golf national teams for the last decade, and Franssen is no stranger to South Africa.

Having etched his name on the Proudfoot Trophy at George Golf Club on his first visit in 2016, Franssen will be looking to join Michael Stewart (2011), Brian Soutar (2012), Daniel Young (2015) and Craig Ross (2016) as a recent Scottish winner of the championship.

The Scotsman beat Travis Procter 5 & 4 in the quarterfinals before edging plucky Sam Simpson in the semis.
Since he resumed his first-round match at 06h30 on Wednesday morning, Simpson had scored 21 birdies and dropped just one shot in 50 holes. Franssen was 2-up after sixth, went 3 up on the eighth and was dormie 2-up when Simpson birdied the 17th to keep the match alive. The Scotsman clinched the win with a birdie finish.

“It was a great game,” said Franssen. “I got off to a hot start, but I was just holding on at the end as Sam was charging. I’m grateful that I was able to pull through. Kyle is another great player, and I’m really looking forward to the match tomorrow.” 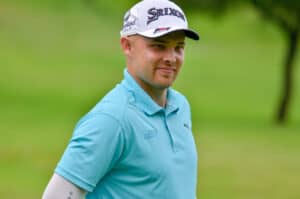 De Beer will be looking to make it six straight local winners as he bids to become the oldest winner since 37-year-old Ryan Dreyer in 2009.

Such is the age group profile of the competition in the SA Amateur that De Beer, now playing his sixth SA Amateur, is considered a grizzled veteran at just 23. The Port Elizabeth Golf Club member beat Jonathan Broomhead 3 & 2 in the quarterfinals before registering a 4 & 2 win over 18-year-old Pascal Gunther, in a match where he never trailed.

“I had two really good games, and I play some solid golf,” said the Ernie Els and Fancourt Foundation member.

“The game against Pascal was a good one. He is a great young player. Jeez, I sound like an old ballie now. But he’s got a lot of talent, and is already a very good player, so it was a sweet victory for me.”

In the women’s Championship Division, Country Club Johannesburg’s Marine Legentil produced not one, but two upsets. 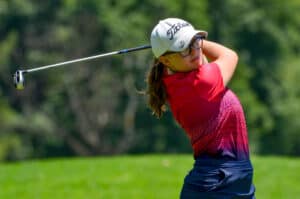 The 19-year-old knocked out GolfRSA No 3 Gabbi Venter 7 & 6 in the quarters before she took down tournament favourite and recent SA Women’s Stroke Play winner Kiera Floyd in the first semi-final.

“I’m so happy with the way I played,” Legentil said. “I got off to an early lead and it helped that I never went behind because I could just stick to my game plan the whole way and concentrate on hitting fairways and greens.

“My strength today was not making many mistakes, which is something I will need to do in the final as well.”

Van Kan, who lost to Caitlyn Macnab two years ago, fired a round of 67 to narrowly beat Samantha Whateley in the quarter final, before coming from behind to edge Ernie Els & Fancourt Foundation member Crystal Beukes 3 & 2 in the semi.

“It was a really tough semi against Crystal,” she said. “She squared the match on the ninth before the weather delay, and once we returned, she played really consistent golf. I was able to win three holes in a row from the 12th and closed it out on 16.”

Still just 17, the Glendower teen is looking forward to another stab at success.

“I was very young the first time around and I got frustrated with every bad shot and missed putt, but my mindset is stronger, and I have more focus. I’m also playing against my best friend, and we’ve played against each other before in Inter-Provincials, but the stakes are just a little higher this time.”

Former SA Mid-Amateur champion Liezl Smit and her daughter Anika will not give an inch either, when the mother and daughter face off in the 18-hole Flight final.

“We both want to be the one to lift the trophy, so there won’t be any gimmes,” said 46-year-old Liezl Smit. “It’s an amazing opportunity for both of us, and we’ll give it our all. Whether I win, or my daughter, Vryheid Golf Club will celebrate nonetheless.”

Smit knocked out Shivania Kalimuthu 2 & 1 in the quarters and Charlotte Millard from Camelot Country Club 3 & 2 in the semis, while Anika routed Nelia Swanepoel 6 & 5 in the morning session to make the all-KwaZulu-Natal semi-final.

“It’s cool to be part of so many historic moments,” said the 17-year-old national squad member after she edged Umhlali’s Olivia Wood 2-up.

“It’s the first time we had four KZN players in the semis, and now mom and I are the first mother-and-daughter final. I’m really looking forward to it. My mom is the No 1 mid-amateur in the country, and she never gives up, so I will put everything she taught me into the practice and try to pull it through.’