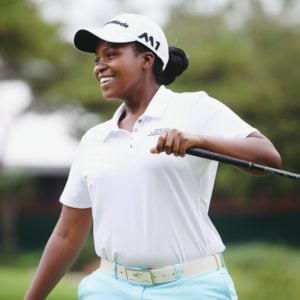 2017 Mpumalanga Open champion Zethu Myeki is upbeat about her start in the All India Ladies Amateur Championship in Bangalore; credit Alison Tu

18 December 2017 – You rarely see Zethu Myeki without a smile these days and it was there again when she stepped up to the first tee at the Eagleton Golf Resort in Bangalore, India on Monday morning.

“I have so many reasons to smile,” said the 24-year-old Myeki from East London. “I’ve had a fantastic season, I’m doing what I love and I am blessed with so much support. I have absolutely no reason not to smile.”

The GolfRSA Elite Squad player is back in India, hoping to go the distance in the Indian Golf Union’s All India Ladies Amateur Championship this year.

“I am backing myself to go beyond the second round,” Myeki said. “When Danielle (du Toit) and I played in this event last year, we were quite inexperienced. The conditions were so different to what we know at home. We didn’t really know what to expect, or how to compete at the top level. A lot has changed for both of us this year. I believe we will both do better this year.”

She grew up in the township of Mdantsane in the East London with three brothers. Her father had a stroke and passed away when Myeki was 13. “As a family, we didn’t have money to spare, but we survived,” Myeki said. “My brothers are all taxi drivers and they supported my mom and I. Losing my dad was tough, because we were very close.”

Discovering golf got her smiling again.

“I was coming home from school one day and saw some girls hitting golf balls in a soccer field,” Myeki explained. “One of the girls was in class with me and I asked her about it. She told me they belonged to the South African Golf Development Board (SAGDB).

“She said I should join and I did. Today, I’m the only one of those girls who still plays. It’s nice now to go to the range at East London Golf Club and help my coach, Michelle de Vries, teach the new girls in the SAGDB programme.”

The Border number one golfer graduated from the SAGDB after matric and was asked to join the Ernie Els and Fancourt Foundation (EEFF), where she has excelled on, and off, the golf course.

Myeki shot from 55th in the Womens Golf South Africa Open Rankings at the end of 2015 and held on to her spot for two seasons. Last year she became the first black female golfer to earn national colours early in 2016. She celebrated her debut alongside Kaleigh Telfer and Ivanna Samu in the 2016 All-Africa Challenge Trophy in Tunisia, where the trio captured South Africa’s 12th victory.

The Border golfer donned the green and gold again this year and partnered Sarah Bouch, Vicki Traut and Lumien Orten to a sixth consecutive victory for South Africa in the Regional All-Africa Challenge in Lesotho.

“I gained a lot of insight and saw areas that needed to improve if I wanted to take my game to a higher level. I had another great season this year with four runner-up finishes, but the win just didn’t come. It was frustrating, but I knew it had to happen at some point.”

Everything comes to those who wait and work hard and Myeki finally got her hands on a trophy in the Mpumalanga Open in November. She fired rounds of 78, 72 and 72 at Ermelo Golf Club to beat Du Toit by three shots in the season-finale. A week later, she upstaged the pros and finished third overall in the Sunshine Ladies Tour Sun PinkStig Finale at Sun City.

Now Myeki and Du Toit hope to conquer in India.

Although Du Toit played a limited schedule in 2017 due to academic pressure, she was in contention every time she teed it up and despite playing just nine events, the Gauteng North player won the Liberty GNGU Women’s, the North West and Gauteng Pro-Shop 36-Hole Championships in addition to four top five finishes.

“Danielle and I both came to India on the back of a strong performance in the Mpumalanga Open and with confidence in our games,” Myeki said. “We’ll take it shot by shot, hole by hole and hopefully I’ll have more reasons to smile about at the end of the week.”

“Competing on the Sunshine Ladies Tour circuit at the start of the season was great experience for me and, thanks to the support from the Ernie Els and Fancourt Foundation, I have played almost all the provincial tournaments this season.

“I’ve definitely taken my game up a few notches this year. Hopefully it will be my week or Danielle’s week here in India. But results aside, the opportunity to come back and to compete in a world-class international amateur event is priceless. This is how we improve and we are really grateful to GolfRSA and Womens Golf South Africa for giving us this chance.”