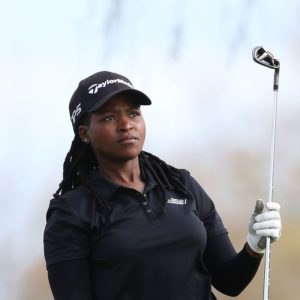 21 April 2018 – Zethu Myeki will return to a happy hunting ground with some early-season momentum when she vies for the 2018 Sanlam South African Women’s Stroke Play Championship at Port Elizabeth Golf Club from 22-24 April.

The 24-year-old Myeki drew the curtain on 2017 – a season punctuated by four runner-up finishes – with a three shot victory in the Mpumalanga Open and launched 2018 with a six shot triumph in the Eastern Province Championship.

Add to that a runner-up finish in the recent KwaZulu-Natal Championship and a top 10 finish in the Western Province Amateur and it comes as no surprise that the GolfRSA Elite Squad player backs herself for another trophy finish at Port Elizabeth Golf Club.

“I know I will have to be at my best to pull it off, but I believe I can do it,” said Myeki.  “We all dream of winning the SA Stroke Play or Match Play. This year I feel that I have a realistic chance to win.”

Since Myeki rose to third in the Womens Golf South Africa Senior Rankings in 2016, she has never lost her footing and a strong start to the season certainly puts her among the prime candidates.

To pull off back-to-back success at Port Elizabeth Golf Club, though, Myeki will have to fend off a flood of rising talent led defending champion Kajal Mistry.

The country’s leading senior dislodged Woo-Ju Son for the number one spot in the Junior Rankings with an emphatic eight-shot victory in the recent Nomads SA Girls Rose Bowl Championship.

The 17-year-old Gauteng golfer sounded a big warning with some incredible form and mental tenacity when she went wire-to-wire at Royal Cape Golf Club at the end of March.

“The junior talent in South Africa is just amazing and they are getting stronger all the time,” said Myeki. “Kajal has been the number one ranked senior for two years and she and Woo-Ju have taken turns at the top of the junior rankings. And behind me, Caitlyn Macnab and Symone Henriques have also shown some great form.

“I expect all of them to be in the running next week, but the field is very open. You can never discount the Eastern Province players, because they have the local course knowledge, especially when the wind gets up.

“But I’ve beaten them all in Port Elizabeth and I believe I can do it again. The Sanlam SA Women’s Stroke Play is a different kind of event. It’s nothing like the pressure you’re under when you compete in a provincial event. You need to be mentally very strong at a premier championship and I believe that’s my ace in the hole.

“My overall game has definitely improved a lot over the last two years. I am hitting the ball better, my short game is solid and I feel confident over my putter. My golf course management has improved a lot, but the biggest game changer for me has been the mental side.

“I trust my decisions on the golf course. I stick to a simple strategy… shot-for-shot and hole-for-hole….and I never play the players, only the course. If you can stay in the moment, you give yourself a chance. And that’s all I want to do in Port Elizabeth.”

Myeki has been drawn alongside Macnab, fourth in the senior rankings, and rising Western Province star Kaylah Williams. Mistry tees off with Casandra Hall from Ekurhuleni and Southern Cape’s Ethel Ruthenburg, while Son will have fellow Gauteng golfer Eleonora Galletti and 2018 Free State Championship winner Sarah Bouch from Ekurhuleni from company.